Uddhav Thackeray Resigns As Maharashtra CM Ahead of Floor Test, What Happens Next? How Will Next Government Come to Power; Here's All You Need to know

Meanwhile, the Maha Vikas Aghadi (MVA) government has collapsed with the resignation of the Chief Minister. Now the floor test will not take place in Assembly. 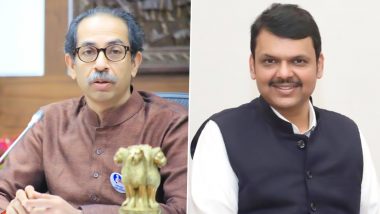 Mumbai, June 30: Uddhav Thackeray on Wednesday resigned as Chief Minister via Facebook Live. Along with the post of Chief Minister, he also quit from MLA post of the Legislative Council. After a four-hour hearing in the Supreme Court, it was decided that the floor test would be held on Thursday.

Thackeray's decision to step down came minutes after the supreme court's nod to a floor test in Maharashtra Assembly. In a virtual address to the state, Thackeray said, "I had come in an unexpected manner and I am going out in a similar fashion. I am not going away forever, I will be here." Uddhav Thackeray Resigns As Maharashtra CM Ahead of Floor Test in Assembly, Says ‘In Democracy, Heads Are Counted To Show Numbers, I Am Not Interested in That’.

Meanwhile, the Maha Vikas Aghadi (MVA) government has collapsed with the resignation of the Chief Minister. Now Governor Bhagat Singh Koshyari will ask Bhartiya Janta Party (BJP), now the largest party, if they have a majority. BJP will then try to assemble maximum support on their side. If the BJP has a majority, they will give a letter in this regard to the governor. The governor will then call the BJP to come to power.

(The above story first appeared on LatestLY on Jun 30, 2022 09:52 AM IST. For more news and updates on politics, world, sports, entertainment and lifestyle, log on to our website latestly.com).