With the pandemic-induced elder vulnerability bringing to the forefront the urgency to provide relief and address systemic inequities, organisations working for the welfare of senior citizens have demanded an increase in social pension to Rs 3,000. 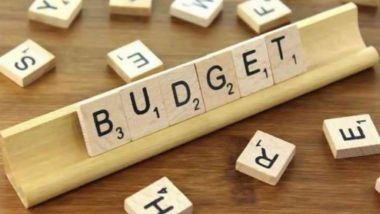 New Delhi, January 27: With the pandemic-induced elder vulnerability bringing to the forefront the urgency to provide relief and address systemic inequities, organisations working for the welfare of senior citizens have demanded an increase in social pension to Rs 3,000 among other demands ahead of the Union Budget 2022-23, to be tabled in the Parliament on February 1. There are an estimated 140 million elderly people in India.

The demands touch the sectors of income and social security, health and geriatric care, and creating an enabling environment for elders with recommendations such as provisions for setting up of skill training and retooling centres for the elderly people; providing GST exemption on services and products commonly used by the elderly, such as adult diapers, medicines and healthcare equipment like wheelchairs, walkers etc. Union Budget 2022-23 Likely to Give More Incentives to Boost Startups, Say Sources.

"As admirably done in the Pradhan Mantri Jan Arogya Yojana (PMJAY) to bring minimum health security for the disadvantaged, we hope the Centre will take leadership in setting a basic minimum social pension floor of Rs 3,000 per month for the poor elderly across the country and revise the Central contribution from a meagre Rs 200 (unchanged for 14 years) to at least Rs 1,000 per month.

Echoing the demand for increasing the old-age pension, Agewell Foundation suggested a scheme to re-engage the seniors to tap the unexplored potential of elderly people, who have experience, knowledge, wisdom, resources, time and above all zeal to work in old age to keep themselves engaged and connected with the mainstream. It even suggested a name for the proposed scheme -- Prime Minister's Self-Employment Scheme for Retired and Senior Citizens (PM SSRSC).

Founder-chairman of Agewell Foundation, Himanshu Rath, said, "Today, elderly persons are facing different kinds of challenges. Making elderly-friendly budgetary provisions would certainly play an important role in ensuring the welfare and well-being of the ever-increasing population of older persons in the country. The elderly persons need opportunities and greater participation in the mainstream so that they can remain gainfully engaged as long as they can."

The two organisations also raised a volley of demands quoting fresh surveys/studies. On the basis of its January 2022 survey conducted among 5,000 elderly persons across the country, Agewell Foundation found that the budgetary provisions can address the issues concerning older persons to a larger extent. As many as 81 per cent of the elderly respondents believed that the government would consider issues concerning the older people.

HelpAge India said the recently published findings of the Longitudinal Study of Ageing in India (LASI) has highlighted the facts of income and health security: Around 70 per cent of the elderly are faced with chronic diseases, while only about 30 per cent of the rural elderly from BPL households are recipients of old-age pension benefits.

Just 26 per cent of households are covered by some form of health insurance in India. As many as 36 per cent of the elderly are working -- much higher in rural areas (40 per cent) than in urban areas (26 per cent), and mostly in the unorganised sector.

(The above story first appeared on LatestLY on Jan 27, 2022 06:16 PM IST. For more news and updates on politics, world, sports, entertainment and lifestyle, log on to our website latestly.com).