Captain Amarinder Singh announced no night curfew from 7 pm to 5 am will now be imposed in Punjab. 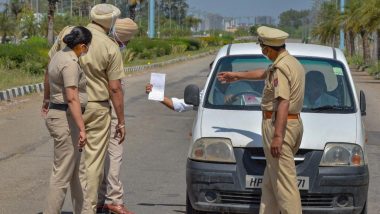 Amritsar, October 1: A day after the Centre released its Unlock 5 guidelines, the Punjab government on Thursday announced more relaxations during the lockdown. According to the Chief Minister's Office, Captain Amarinder Singh announced no night curfew from 7 pm to 5 am will now be imposed in Punjab. The Punjab government has also decided to end complete lockdown on Sundays. The relaxations were announced after there was a decline in coronavirus  (COVID-19) cases. Unlock 5 Guidelines: Cinema Halls, Entertainment Parks to Reopen, States Allowed to Open Schools From October 15, Parents' Consent Mandatory.

"Amid declining Covid cases and deaths, CM Captain Amarinder Singh orders a slew of relaxations, including lifting of night curfew and end to Sunday lockdown, while directing the DGP to strictly enforce wearing of masks and other safety norms," the CMO said. The government also raised the limit for marriage functions and funerals to 100 and allowed 3 persons in a car and 50 percent capacity in buses, subject to the condition of windows being open.

As the Centre's has allowed states to take a call on the opening of schools from October 15, the CMO said the final decision will be announced after due deliberations between the Home Secretary and the Education Department. Forty-seven more COVID-19 deaths were reported in Punjab on Wednesday, taking the toll in the state to 3,406, while 1,435 new cases pushed the infection tally to 1,13,886.

The Punjab government has decided to start strict monitoring of asymptomatic and mild symptomatic COVID-19 patients in home isolation with help from a consortium of professional home healthcare companies. The consortium has the experience of such monitoring in other states, including Delhi, Mumbai, Chennai and Karnataka.

(The above story first appeared on LatestLY on Oct 01, 2020 05:04 PM IST. For more news and updates on politics, world, sports, entertainment and lifestyle, log on to our website latestly.com).