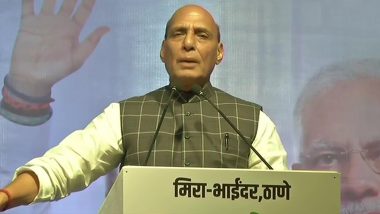 Dehradun, November 9: Time has come, said Defence Minister Rajnath Singh on Saturday when asked about Uniform Civil Code (UCC) in the country on a day when the Supreme Court delivered landmark judgement in the Ram Janmabhoomi-Babri Masjid case.

"Aa gaya samay (Time has come)," he told reporters here when asked about the UCC. The Delhi High Court on Monday will hear a bunch of petitions seeking implementation of the UCC. A division bench of Chief Justice D N Patel and Justice C Harishankar will hear the matter on November 15. Ayodhya Verdict: PM Narendra Modi Hails Supreme Court Judgment, Says 'Decision Should be Seen as Win or Loss For Anybody'.

The UCC would put in place a set of laws to govern the personal matters of the citizen irrespective of their religion. In May, the court had asked the Centre and the Law Commission to file their affidavit on the PIL regarding the implementation of the Uniform Civil Code.

The Defence Minister also hailed the Supreme Court's verdict in Ayodhya case a landmark judgement. "The verdict of the Supreme Court in the Ayodhya case is a landmark judgment. I think this will strengthen that the feeling of 'Sarv Dharma Sambhav' (all religion are equal) and relations among people will be better. I appeal people should maintain peace and the verdict should not be taken as a win or loss for anyone," he said.

The Supreme Court on Saturday directed the central government to hand over the disputed site at Ayodhya for the construction of a temple and set up a trust for the same. The apex court further directed the government to give a suitable plot of land measuring five acres to the Sunni Waqf Board.

A five-judge constitution bench presided by Chief Justice Gogoi and comprising Justices SA Bobde, DY Chandrachud, Ashok Bhushan and S Abdul Nazeer passed the order on a batch of petitions against an order of the Allahabad High Court which trifurcated the site between the parties -- Ramlalla Virajman, Sunni Central Waqf Board and Nirmohi Akhara.

A decades-long legal dispute was fought by right-wing party Hindu Mahasabha, a sect of Hindu monks Nirmohi Akhara and Sunni Waqf Board over 2.77 acres of land in Ayodhya.