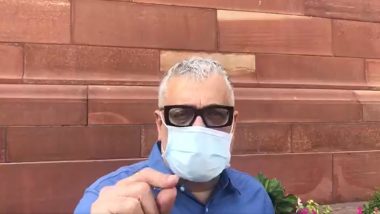 O'Brien further alleged that the government censored Rajya Sabha Television and blocked the live feed of RSTV to prevent the nation from knowing what transpired inside the House amid the chaos. "We (Opposition MPs) have the evidence. We will release it at the right time," he said. Agricultural Reform Bills: Rajya Sabha Passes 2 Farm Bills Amid Protests by Opposition Leaders And Farmers.

"They cheated. They broke every rule in Parliament. It was a historic day. In the worst sense of the word. They cut RSTV feed so the country couldn't see. They censored RSTV. Don’t spread propaganda. We have evidence," O'Brien said, as he tweeted a video from the central hall of the Rajya Sabha. Farm Bills: What Are The 3 Legislations Brought by Modi Government? Why Are Farmers Protesting? All You Need to Know.

In another video, shared by O'Brien from outside the Parliament building, he claimed that 13-14 Opposition parties are sitting on a dharna inside the Rajya Sabha premises to mark their angst against the passage of farm Bills without the decision of votes. "As per the rules, even if one MP seeks a division of votes, then it is necessitated," he pointed out.

Two of the three controversial agriculture reform Bills - Farmers’ Produce Trade and Commerce (Promotion and Facilitation) Bill, 2020, and Farmers (Empowerment and Protection) Agreement on Price Assurance and Farm Services Bill, 2020 - were passed in Rajya Sabha via a voice vote amid ruckus and protests.

The Bills were cleared in the Lok Sabha on Friday, and had subsequently led to the swelling of protesters across Punjab and Haryana. Despite assurances issued by Prime Minister Narendra Modi on the minimum support prices (MSP), the protesting agrarian outfits have refused to relent.

(The above story first appeared on LatestLY on Sep 20, 2020 05:34 PM IST. For more news and updates on politics, world, sports, entertainment and lifestyle, log on to our website latestly.com).