"It is an irony that two richest persons of our country come from Gujarat, and the poorest tribals of our country are also from Gujarat. In Dahod, Chhota Udepur, Aravalli, Dang -- there are many areas where some of the poorest people live," Kejriwal said at the 'Adivasi Sankalp Maha Sammelan' organised jointly with the BTP at Chanderiya village in Bharuch. 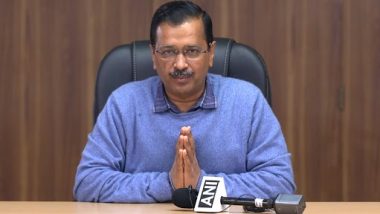 Bharuch, May 1: Ahead of the Gujarat Assembly polls due later this year, Aam Aadmi Party's national convener Arvind Kejriwal on Sunday said he stands with the tribals of Gujarat and is happy to work with Bharatiya Tribal Party (BTP) founder Chhotu Vasava to bring about a change in the state and improve lives of the poor.

In his first public rally in Gujarat ahead of the Assembly elections, the Delhi chief minister said while the ruling BJP and opposition Congress stand with the rich, he stands with Chhotu Vasava, the latter's younger brother and BTP's national president Mahesh Vasava and the state's poor people.

"It is an irony that two richest persons of our country come from Gujarat, and the poorest tribals of our country are also from Gujarat. In Dahod, Chhota Udepur, Aravalli, Dang -- there are many areas where some of the poorest people live," Kejriwal said at the 'Adivasi Sankalp Maha Sammelan' organised jointly with the BTP at Chanderiya village in Bharuch. Gujarat Assembly Elections 2022: Arvind Kejriwal, Punjab CM Bhagwant Mann Hold Roadshow in Ahmedabad.

"The BJP and Congress stand with the rich...they are making the rich richer. I am here to tell you Chhotubhai and Maheshbhai that Kejriwal and AAP, we stand with you, we stand with the poor...Give us a chance, we will remove your poverty, educate your children, make hospitals for you and give you a job," he claimed. Kejriwal thanked the two BTP leaders for inviting him to the rally.

"We will work together to change Gujarat," the AAP leader said.

In the 2017 state Assembly polls, the BTP had formed an alliance with the Congress and won two seats.

On the occasion of Gujarat's foundation day on Sunday, Kejriwal also targeted the BJP over its state president C R Paatil, and claimed there cannot be a bigger insult of the state's people than the ruling party appointing "a man from Maharashtra" as its chief.

"Who is the president of Gujarat BJP? C R Paatil. Where does he live? He lives in Maharashtra. The BJP could not find a president from among 6.5 crore Gujarat citizens...such an insult of the people of Gujarat," he said.

Kejriwal also invited Gujarat Chief Minister Bhupendra Patel to visit schools and hospitals in Delhi and not criticise the AAP government there "just like that". Kejriwal said the BJP, despite being in power in Gujarat for 27 years, "failed" to improve the condition of government schools.

"Give them five more years and they will do nothing...Gujarat will not improve. Give us one chance, and if we do not improve the conditions of all schools, kick us out," he said. The AAP leader also promised free electricity, corruption-free government services, doorstep delivery of public services and employment generation for people of Gujarat, if voted to power.

"Break their (BJP's) arrogance once and vote for the AAP," he said.

Kejriwal said he has heard that the BJP wants early election in Gujarat.

"They are scared of AAP...They say if we (AAP) get time till December, then they (BJP) will lose Gujarat. They want the election to be held now," he claimed.

Kejriwal also invited leaders of the Gujarat Congress to join AAP. "Now that nothing is left of of the party (Congress), there is no point in voting for it," he said. He made a similar appeal to BJP leaders, claiming that "Gujarat is getting destroyed under the BJP". "Think of Gujarat and the country," he told the gathering.