Congress, which seeks resurrection, has failed to woo the voters in Gujarat. At this point, the grand-old party does not look grand, it just looks old. The party is struggling in the states where it enjoyed power once. 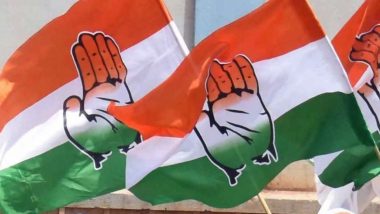 Congress Flag (Photo Credit- PTI)
Ahmedabad, December 8: As counting takes place for Gujarat Assembly Elections 2022, it turns out that Congress is on edge of another poll defeat. As per the latest trends, India's grand-old party currently leads on mere 16 seats, while BJP has managed to clinch a landslide victory with over 150 seats in a three-cornered battle - AAP being the new entrant. It appears that the ghost of poll debacles is not letting go of India's grand-old party since its departure from the centre in 2014. Gujarat Election Results 2022: From Modi Factor to Weak Opposition, Here's What Helped BJP To Register Historic Victory in Vidhan Sabha Polls.
Congress, which seeks resurrection, has failed to woo the voters in Gujarat. At this point, having power only in two states namely Chhattisgarh and Rajasthan, the grand-old party does not look grand, it just looks old. This has been scene with Congress for a while now. The party is struggling in the states where it enjoyed power once. Gujarat Assembly Election Result 2022: Amit Shah After BJP Landslide Victory, Says ‘People Rejected Politics of Revadi, Appeasement and Hollow Promises’.

Prime minister Narendra Modi played a huge role in BJP's win in Gujarat. With his roadshows, rallies, and public address, PM Modi made sure BJP never gets sidelined. As trends have it, the Modi wave is real as Narendra Modi is still a popular face in India.
No popular Face:
The original "big tent" party of the country has let its tent shrink over the years. The Congress still revolves around the Gandhis and their legacy. The party needs an immediate overhaul. India's grand-old party that survives on its volunteers and foot soldiers, the need for a popular face felt badly in Gujarat assembly polls.
High Command's Negligence:
Several Congress premiers did not even visit Gujarat during campaigning. Even Rahul Gandhi held just a few public rallies ahead of the polls. The negligence of big leaders cost Congress yet another poll debacle.
Exits of Key Players:
Congress, plagued with the exits of prominent and key players, lost the likes of Ghulam Nabi Azad, RPN Singh, Jaiveer Shergill, Sunil Jakhar, Kapil Sibbal, and many more. In Gujarat Congress party suffered a blow after 11-time MLA Mohansinh Rathwa, Bhavesh Katara, Himanshu Vyas, Hardik Patel, among many others left Congress ahead of the polls.
No Sustained Campaign:
Congress did not take the reins of the party when it was in shambles. Party's defeat can be attributed to no sustained election campaign in the poll-bound state. It almost felt as if Congress knew that they would not clinch Gujarat from the grips of the BJP.
The party enjoys broad support across the country, and Rahul Gandhi-led Bharat Jodo Yatra can attest to that. The party does not lack resources, it seats comfortably second to the BJP in that matter. It also has a national voter base of about 20-25 percent. However, the current state of the party is troublesome. With General Elections around the corner, Congress has little time to get its act together.

(The above story first appeared on LatestLY on Dec 08, 2022 02:59 PM IST. For more news and updates on politics, world, sports, entertainment and lifestyle, log on to our website latestly.com).