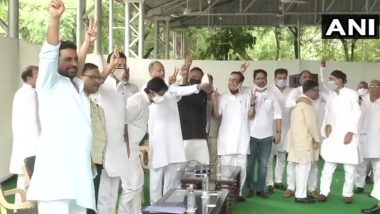 Rajasthan, July 13: CM Ashok Gehlot's media advisor confirmed that 107 MLAs were present at the Congress Legislative Party (CLP) meeting in Rajasthan's Jaipur on Monday. According to the latest ANI update, the meeting has concluded.

Ahead of the meeting, Gehlot invited the media into his official residence for a photo session to back up his claim that the rebellion caused by deputy chief minister Sachin Pilot hadn’t succeeded in reducing his government to a minority. Sachin Pilot's Posters Back at Congress Headquarters After Party Says 'Doors Open For All' Amid Rajasthan Political Crisis.

Congress leaders Ajay Maken, Randeep Singh Surjewala and Rajasthan in-charge Avinash Pande were also present at the meeting. After Pilot's revolt, there were multiple reports that said he is likely to join BJP. Speaking to a news channel, Pilot cleared the air and said that he is "not joining the BJP"

On Sunday, Pilot openly revolted against CM Gehlot. He reportedly issued a statement saying he has the support of 30 MLAs and the Ashok Gehlot government is in minority.

Earlier in the day, the Congress Legislative Party issued a whip to its MLAs to attend a meeting which took place today in Jaipur. Disciplinary action was warned against lawmakers if they remained absent without mentioning a reason.

(The above story first appeared on LatestLY on Jul 13, 2020 03:11 PM IST. For more news and updates on politics, world, sports, entertainment and lifestyle, log on to our website latestly.com).