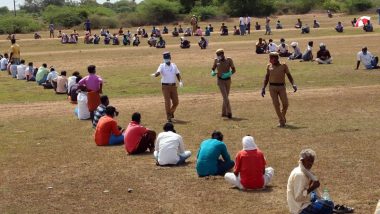 Murugan alleged that as the Leader of Opposition during the previous AIADMK government's tenure, Stalin had protested against the opening of Tasmac shops during the first COVID-19 wave.  Tasmac Liquor Shops Open Again in Tamil Nadu, Long Queues Seen Outside Alcohol Outlets; See Pics

He said, "When the AIADMK government announced the opening of Tasmac shops during the first wave of the pandemic, Stalin said he and his party condemned the decision and led huge protests against it across the state.

Now when in power DMK-led government are opening these liquor shops. This is the height of duplicity. Government should not allow opening of Tasmac shops as it will affect the health and lives of the people."

Destitute people have been largely hit by the COVID-19, said the senior BJP leader, adding, that such people will be affected more by opening of these liquor shops.

"During the elections, the DMK had promised to shut down Tasmac shops, while Stalin's sister and party MP Kanimozhi, had even said the liquor making units would be shut down but the DMK-led government is now opening Tasmac shops during the pandemic, thus adding misery to the lives of poor people," he added.

(The above story first appeared on LatestLY on Jun 13, 2021 06:52 PM IST. For more news and updates on politics, world, sports, entertainment and lifestyle, log on to our website latestly.com).