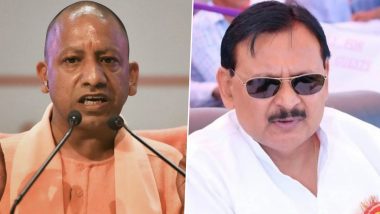 Gorakhpur, February 28: A total of 57 assembly seats in 10 districts will go under the polls in phase 6 of the Uttar Pradesh Assembly Elections 2022. The voting for the 6th phase of UP polls will be held on March 3, while the results will be declared on March 10. Meanwhile, election campaigns of all parties will end at 5 pm on Wednesday.

Let's Take a look at the Key Candidates in Phase 6 of UP Elections:

Chandrashekhar Azad’s description on Wikipedia reads "He has established himself as Dalit icon and he is known for his style. Azad does something more: His style is ostentatious. It rejects docility, minimalism, and discretion. It is not quietly elegant, but emphatically flamboyant. It flaunts Raybans alongside homespun, replaces hipster beards with the twirled 'tache. It is Azadi with swag.” Chandrashekhar Azad Ravan is a lawyer and a Dalit-Bahujan rights activist. Azad will be taking on CM Yogi Adityanath from Gorakhpur Urban seat in phase 6 of UP polls. Uttar Pradesh Assembly Elections 2022: From Gorakhpur to Pathardeva, Here Are The Five Key Contests in The Sixth Phase.

Samajwadi Party's Brahma Shankar Tripathi will be in the fray from the Pathardeva assembly seat in the Deoria district. A prominent Brahmin face, Tripathi has been a cabinet minister twice in the past.

In 2017 UP polls, BJP had outperformed other political parties by winning 325 seats along with allies to form a majority government in the state. Meanwhile, out of the total 403 seats, 54 were won by the SP-Congress alliance and 19 by the BSP.

(The above story first appeared on LatestLY on Feb 28, 2022 04:31 PM IST. For more news and updates on politics, world, sports, entertainment and lifestyle, log on to our website latestly.com).