TMC workers and people from across the state started gathering in the metropolis since midnight to attend the public meeting to be held near Victoria House at Esplanade. 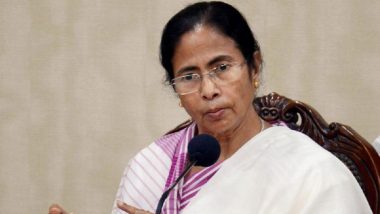 Kolkata, Jul 21: All roads in the city will today lead to Esplanade, the venue of the TMC's annual Martyrs' Day rally, where West Bengal Chief Minister Mamata Banerjee is likely to spell out the party's strategy for the next Lok Sabha polls. The TMC observes the Martyrs' Day every year on July 21 in its bid to pay homage to 13 Youth Congress workers, allegedly killed in police firing in 1993 during the Left Front regime in West Bengal. Banerjee was a leader of the Youth Congress at that time.

"Today, we will get the directive from our supremo for the Lok Sabha polls next year. We will also give a befitting reply to allegations made by BJP leaders during Narendra Modi's (Midnapore) rally," a senior TMC leader said.

The rally also comes a day after the no-confidence motion against the Modi government was decisively defeated.

Banerjee had earlier said her party was supporting the motion against the BJP government at the Centre in the greater interest of the Opposition unity, and the TMC had issued a whip to its Lok Sabha MPs, asking them to be present in the House yesterday.

TMC workers and people from across the state started gathering in the metropolis since midnight to attend the public meeting to be held near Victoria House at Esplanade. The rally is of immense importance given the party's ambition to play a major role after the next Lok Sabha polls, political observers said. It is also likely to see the joining of Congress MLAs and senior leaders from other parties.

"We will take the pledge at the July 21 rally to oust the BJP in 2019. The country will definitely get the opportunity to see Chief Minister Mamata Banerjee's developmental work nationwide after 2019," TMC MP Abhishek Banerjee had recently said.

The MP, along with senior TMC leaders, had visited the venue in the heart of the city yesterday and oversaw preparations for the rally. Around 6,000 police personnel will be deployed for the rally, a senior officer of the Kolkata Police said.

Besides, close to 100 CCTVs have been installed in and around the area to keep a close watch on the proceedings, including hidden cameras near and underneath the dais of the rally to foil any "sabotage" attempt, he said.

According to senior TMC leaders, the party's aim to play a major role at the national-level can only be successful if it manages to bag the maximum number of seats out of the 42 Lok Sabha seats in West Bengal.

The party presently has 34 Lok Sabha seats from West Bengal.

With nearly 40 of the 42 Lok Sabha seats in the state being located in villages and semi-urban areas, the party is hoping to cash in on its stupendous performance in the May panchayat polls, where it managed to win all the zilla parishads and nearly 80 per cent of the gram panchayat seats.