April Fools’ Day 2022: Know Date, Origin, History, Significance and How To Celebrate the Day of Playing Jokes and Pranks!

April Fools' Day will be celebrated on 1st April. People on April Fool’s day trick each other by lying that something like this or that happened or by playing pranks, hoaxes and practical jokes to fool each other. Jokesters often expose their actions by shouting "April Fools!" at the recipient. 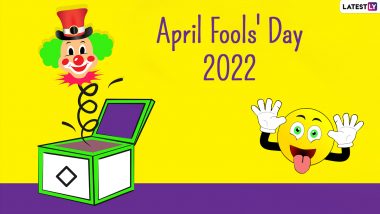 April fool’s day is a western cultural day, celebrated every year on April 1 across the world. People on April Fool’s day trick each other by lying that something like this or that happened or by playing pranks, hoaxes and practical jokes to fool each other. And later reveal the prank, hoax or joke by shouting ‘April fool’ on the person at the receiving end. Though the day is widely celebrated everywhere, it is not a public holiday, except in the city of Odessa, Ukraine. April Fool’s day is considered the joyful day of the year, and people tend to reveal their hilarious side by fooling each other. April Fools' Day 2022 Funny Memes and Jokes: Too Lazy for Physical Pranks? Hilarious Posts to Take a Dig at Your BFFs That is Guaranteed to End With LOLs on April 1st!

Many historians came up with different origins of April Fool’s day. And with all the uncertain origins of this day, it remains unsettled for us to believe and who do not. Some historians state that the celebration originated after following a new calendar, while some think it is related to the change of seasons. April 2022 Holiday Calendar With Major Indian Festivals and Events: Chaitra Navratri, Ramadan, Good Friday; Check List of All Important Dates and Bank Holidays for the Month.

Professor of history at Boston university Joseph Boskin provided another explanation of April Fool’s day. During the rule of Roman emperor Constantine the Great, he said a group of fools and court jesters told him that they could run the empire better. Constantine, in amusement, handed over the reign to one of the jesters named Kugel for one day. Kugel of nonsensicality passed a decree on that day, which later became an annual custom.

Moreover, many festivals are celebrated at the end of march and around the beginning of April. Like the Romans had a festival called Hilaria on March 25, Jewish celebrate Purim around this time, and the Hindu calendar have Holi. With the transition of winters into springs, the festivities begin, and this time of the year lends itself to so many lighthearted and joyous celebrations, including April Fool’s day.

(The above story first appeared on LatestLY on Mar 30, 2022 10:03 AM IST. For more news and updates on politics, world, sports, entertainment and lifestyle, log on to our website latestly.com).