Durga Ashtami 2019 Date and Sandhi Puja Muhurat Time: Significance of Maha Ashtami During Pujo, Here’s Everything About the Third Day of Durga Puja

Durga Ashtami sets the beginning of the final battle where Maa Kali defeats Mahishasur, and restores the good in the world. The essence of both Pujo celebrations, as well as Navratri, remains the same - the victory of good over evil. 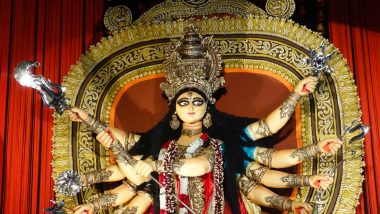 Durga Puja 2019 celebrations are carried out with great pomp and enthusiasm across the country. Celebrated from the sixth day of Sharad Navratri, we have almost reached the main day of Durga Puja or Durga Pujo festival. One of the most important and auspicious days of Pujo that is fast approaching is the Maha Ashtami 2019. Also called Durga Ashtami, it is the eighth day of Devi Paksha and will be celebrated on October 6 this year. The celebrations include Maha Ashtami Puja, aartis, fasting and more. Durga Ashtami is also known for the Astra Puja (Worshipping Weapon), where Goddess Durga’s weapons are worshipped. Sandhi Puja and Kumari Puja also take place on the day. Durga Ashtami 2019 Wishes in Bengali: WhatsApp Stickers, GIF Image Greetings, Messages, Status, SMS and Facebook Cover Photos to Wish Your Friends Subho Maha Ashtami!

While we all know that Maha Ashtami is one of the most significant days during Pujo, but it is important to understand what makes it so important, and how is it celebrated. We will also learn about Durga Ashtami 2019 date (tithi), Sandhi Puja rituals (puja vidhi), shubh muhurat (auspicious timings) and significance.

When is Maha Ashtami?

Maha Ashtami is the second day of the Maha Pujo and third day of Durga Puja celebrations in general. It is commemorated on the eighth day of Navratri. This year, Maha Ashtami or Durga Ashtami will be celebrated on October 6, 2019. Durga Ashtami 2019 Wishes: Subho Maha Ashtami WhatsApp Stickers, GIF Image Greetings, Facebook Quotes and SMS to Wish on Maha Ashtami.

Why is Maha Ashtami Celebrated?

Maha Ashtami is said to be the day that Goddess Durga Opens her third eye and showers blessings on her devotees. The form of Goddess Durga that is worshipped on Durga Ashtami is Goddess Chamunda, and many believe that on this day she appeared from the forehead of Mother Durga and annihilated Chanda, Munda, and Raktabija (the demons who were associates of Mahishasura).

How is Durga Ashtami Celebrated?

The celebrations of Durga Ashtami begins with pushpanjali and aarti in Durga Puja pandals. The festival is also celebrated with great enthusiasm in the households with Sandhi Puja being performed when the Ashtami tithi ends. This year the puja muhurat is from 10.30 am to 11.18 am according to Drikpanchan.com. Devi Chamunda is believed to slay the demons Chanda and Munda during this time. People also perform Kumari Puja on this day.

How is Sandhi Puja Performed?

During the time of the Sandhi Puja, one hundred and eight lamps are lit, and Goddess Durga is offered 108 lotus flowers and bilva leaves. This puja is said to be an ode to Goddess Kali who appears from Goddess Durga’s third eye. Since Ashtami is the day that the third eye is said to open, it is believed that Kali appears on this day and sets to defeat the buffalo demon Mahishasur.

Durga Ashtami sets the beginning of the final battle where Maa Kali defeats Mahishasur, and restores the good in the world. The essence of both Pujo celebrations, as well as Navratri, remains the same - the victory of good over evil. And as we celebrate these auspicious days, it is crucial to remember these learnings. We hope that this Durga Ashtami, your beliefs in the good is restored. Happy Durga Ashtami.

(The above story first appeared on LatestLY on Oct 05, 2019 05:05 PM IST. For more news and updates on politics, world, sports, entertainment and lifestyle, log on to our website latestly.com).