Every year Mother Language Day is celebrated on February 21. Different places hold various events and competitions from 21 to 27 February commemorating the day. 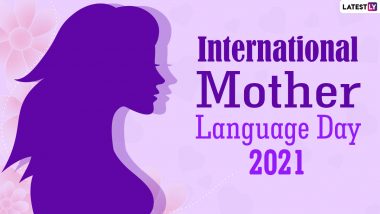 Every year Mother Language Day is celebrated on February 21. Different places hold various events and competitions from 21 to 27 February commemorating the day. Mother Language Day 2021 has its additional Chief Secretary as Renuka Kumar issued the order. Mother tongue day is observed on 21 February.  The purpose of celebrating this day is to promote linguistic and cultural diversity and multilingualism in the world. February 2021 Holidays Calendar With Festivals & Events: Valentine’s Day, Shivaji Maharaj Jayanti, Vasant Panchami; Know All Important Dates, List of Fasts & International Days for the Month.

On this day in 1952 students of Dhaka University and some social activists staged a protest to maintain the existence of their mother tongue. The protest soon turned into a massacre. 16 people were killed in this incident. In 1999, UNESCO (United Nation) announced to celebrate International Mother Language Day for the first time in memory of those martyred in this major language movement. It can be said that International Mother Language Day is celebrated in the world today due to the love of the mother tongue of Bangla speakers.

Every year this day celebrates a different theme. The theme for 2021 is "Fostering multilingualism for inclusion in education and society". The day also encourages the meaning of indigenous languages ​​in development and peace. According to UNESCO, 6000 languages ​​are spoken worldwide. Talking about India, according to the census of 1961, 1652 languages ​​are spoken. Of these, 42.2 crore people have their mother tongue as Hindi. There are 29 official languages ​​in India, the number of speakers are more than 1 million.

(The above story first appeared on LatestLY on Feb 20, 2021 05:32 PM IST. For more news and updates on politics, world, sports, entertainment and lifestyle, log on to our website latestly.com).