Seollal, or Korean Lunar New Year is a holiday and celebration which marks the first day of the Korean Lunar Calender. This year the three-day festival will start from 1st February. Read more to know about customary practises and rituals that are performed during Seollal by Korean population. 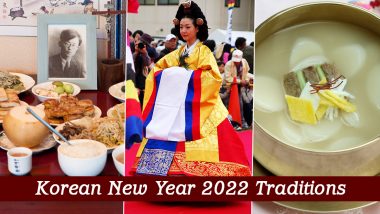 In South Korea, one of the most auspicious and important holidays is Korean Lunar New Year or Seollal. It marks the first day of the Korean Lunar Calendar. The three-day celebration will start from February 1st with January 31st and February 2nd also part of the official holiday. The lunar year generally occurs on the second new moon after the winter solstice, unless there is an intercalary eleventh or twelfth month in the lead-up to the New Year. Korean New Year 2022: Date, History And Everything You Need To Know About Seollal, Korean Lunar New Year.

Seollal is a unique Korean tradition, influenced by China, that is based on the lunar cycle. The centerpiece of the holiday is the ritual of ancestor worship, but there are other activities that are performed for good luck and prosperity.  Korean people celebrate Seollal by following numerous conventional rituals and customs that attribute to certain reasons.

On the early morning of Seollal, family members gather to perform the ritual of 'Charye', wherein they pay respect towards their ancestors by placing food in front of pictures or names of deceased relatives.

Sabae is the act of kneeling on the ground in such a way that your hands are also on the ground. It is a deep traditional bow that signifies respect.

It is believed that once you finish eating your Tteokguk or sliced rice cake soup, you are one year older. The dish represents the dawn of a new year and the round shape recalls a time when Koreans used to worship the sun.

When not eating or catching up on each other’s lives, families often play games like Yut-Nori, which is played with special sticks tossed in the air.

Korean people wear vibrant coloured attire which is their traditional dress for all the rituals and customs, known as Hanbok.

(The above story first appeared on LatestLY on Jan 21, 2022 04:43 PM IST. For more news and updates on politics, world, sports, entertainment and lifestyle, log on to our website latestly.com).