National Security Day is celebrated on March 4. This Day is marked to appreciate the work of security forces in our country, who play a significant role in maintaining the people's peace and security. This Day is also known as the Rashtriya Suraksha Diwas. 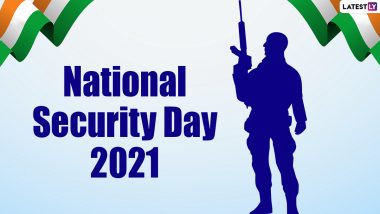 National Security Day is celebrated on March 4. This day is marked to appreciate the work of security forces in our country, who play a significant role in maintaining people's peace and security. This day is also known as the Rashtriya Suraksha Diwas.

This day is celebrated to show gratitude to all the security forces, including policemen, para-military forces, commandos, guards, army officers, and other personnel involved in security, who sacrifice their life so that the people of India can live peacefully without fear. NSG Raising Day 2020: PM Narendra Modi Wishes National Security Guard Personnel, Their Families on 36th Raising Day.

Security plays a vital role in protecting the sovereignty, integrity and safety of the country. Security forces not only protect the borders of our country but also provide us with protection during festivals, mass gatherings and disasters. National Security Day is celebrated to praise security forces like police, commandos and other security forces who are always on duty whenever needed.

National Security Council (NSC), the apex agency that looks into the country's political, economic, energy and strategic security concerns, was established by then Prime Minister, Atal Bihari Vajpayee, on November 19, 1998.
The NSC handles internal and external security, conventional and non-conventional defence, military affairs, counter-insurgency, space and high technology, economy, counter-terrorism, and environment. The Prime Minister of India heads the NSC. The National Security Council is an advisory body that works in proper coordination and integration with plans and policies affecting national security.
On National Security Day, various functions and events are organised as a gesture of gratitude towards our country's security forces. Schools and colleges organise essay and speech competition to spread to express gratitude towards security forces.

(The above story first appeared on LatestLY on Mar 04, 2021 10:44 AM IST. For more news and updates on politics, world, sports, entertainment and lifestyle, log on to our website latestly.com).