Penumbral Lunar Eclipse 2020: What Is Thunder Moon Eclipse? 5 Things to NOT Do During Chandra Grahan to Avoid Bad Luck 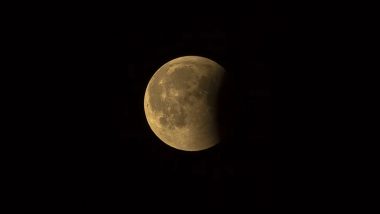 Things to NOT Do During Chandra Grahan to Avoid Bad Luck (Photo Credits: Pixabay)

The year 2020 will see the lunar eclipse on 5 July. Also known as Penumbral Lunar Eclipse, Buck Moon and Thunder Moon Eclipse will be seen in Las Angeles on July 4 from 08:05 to 10:52. While it will last for about three hours, the earth, moon and sun aligning will have the moon pass through the outer part of the earth's shadow. This is what causes the penumbral lunar eclipse and it will be a beautiful sight to watch for eclipse enthusiasts. Penumbral Lunar Eclipse 2020 Date And Time: Know Visibility in India and Duration of the Celestial Event Coinciding With Full Buck Moon.

What is Thunder Moon Eclipse

The lunar eclipse is also dubbed as Thunder Moon Eclipse and the Maine Farmer's Almanac first published Indian names for the full moons back in the 1930s and the full moon in July is called the 'Buck Moon'. The name is given on the basis of the time when early summer's thunderstorms occur frequently and since the lunar eclipse takes place on the full moon night, the eclipse of July 5 is being called the Thunder Moon Eclipse. It majorly gets its name from the summer storms that occur around July's full moon.

The lunar eclipse is also associated with superstitions. Some people think that doing certain things during a lunar eclipse brings in bad luck. However, these are rules followed by people who believe in superstitious tricks and have not been backed scientifically. Take a look at a few things said to bring in bad luck:

How many lunar eclipses will there be in 2020

The lunar eclipse (Chandra Grahan) is the name given to that celestial phenomenon when the Earth comes between the sun and the moon. The geographical position of all three do not occur in a straight line and the shadow falls from the middle part of the earth called the Umbra. This causes a shadow of the outer part of the earth on the rest of the moon, which is called the pinumbra or penumbra.

(The above story first appeared on LatestLY on Jul 02, 2020 10:43 AM IST. For more news and updates on politics, world, sports, entertainment and lifestyle, log on to our website latestly.com).