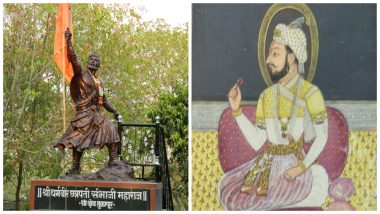 Sambhaji Bhosle was the eldest son of Maratha leader Shivaji Maharaj. Sambhaji became the second ruler of the Maratha state after his father's death. His mother died when Sambhaji was two years old. After his mother's death, his grandmother Jijabai took care of him. Having grown up under Jijabai's umbrella, Sambhaji had high values ​​and strong intentions. Sambhaji led the Maratha army for the first time in 1672 in the battle of Kolwan. Peshwa Moropant Pingale was also with him in the fight. Sambhaji emerged victorious in the battle of Colwan. He ruled for many years facing challenges.

He fought many wars with the Mughals Sultanate under his rule. Apart from this, they also took the front from Siddi, Mysore and Portuguese. It is said that Sambhaji had a deep understanding of politics at a very young age. Every year, the contribution made for the Maratha region on the birth anniversary of Sambhaji is remembered. Sambhaji was assassinated on 11 March 1689.

I bow to the king of people's hearts...

Who fought ferociously for the people and it's motherland....

I bow to Chhatrapati Sambhaji Maharaj...🙏🙏🙏#sambhajiMaharaj

April 11, 2021 marks 332nd death anniversary (as per Hindu tithi) of the unsung warrior #Dharmaveer #SambhajiMaharaj@sanatanprabhat periodicals pay tribute to the legendary Hindu king through this VIDEO

🚩Let's learn from our illustrious past & build a glorious future!

The Mughal emperor Aurangzeb thought that the Maratha empire would cease to exist after his death. But in contrast, the divided Maratha chieftains gathered and started fighting. It is said that this fight did not allow Aurangzeb's dream of occupying the Deccan to be fulfilled. Discussions of the bravery of Sambhaji Maharaj are still found on the tongue of the children of Maharashtra.

(The above story first appeared on LatestLY on Apr 11, 2021 09:42 AM IST. For more news and updates on politics, world, sports, entertainment and lifestyle, log on to our website latestly.com).