Shankaracharya Jayanti will fall this year on Monday, May 17, 2021. This event commemorates the birth anniversary of an Indian Guru and philosopher Adi Shankara. This festival is celebrated on the Panchami tithi (fifth day) in the Shukla paksh (waxing moon) in the Vaishakh month of the Hindu calendar. 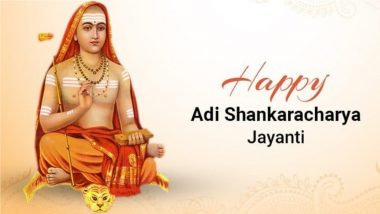 Shankaracharya Jayanti 2021 is celebrated on May 17. This event commemorates the birth anniversary of an Indian Guru and philosopher Adi Shankara. Shankaracharya took birth at Kalady in Kerala during 788 C.E. He was disappeared in the year 820 C.E at the young age of 32. The day is celebrated on the Panchami tithi (fifth day) in the Shukla paksha (waxing moon) in the Vaishakh month of the Hindu calendar.  The Adi Shankaracharya Jayanti usually falls during the month of April or May as per the gregorian calendar. Netizens took to the micro-blogging platform to celebrate the Indian philosopher's birth anniversary with HD images, wishes, greetings, and SMS. May 17, 2021: Which Day Is Today? Know Holidays, Festivals and Events Falling on Today’s Calendar Date.

The Panchami for Shankaracharya Jayanti 2021 tithi will begin at 10:00 am on May 16, 2021, and end at 11:34 am on May 17, 2021. Adi Shankara, along with Madhava and Ramanuja, played an important role in the revival of Hinduism. They formed the doctrines that are followed by their respective sects to date. Three of them are considered the most powerful figures in the recent history of Hindu philosophy.

It is also believed in some parts of India that Adi Shankara was an incarnation of Lord Shiva in a human form. He wanted to live an ascetic life from a young age. Once, he was bitten by a crocodile in his leg while taking a bath in a river near his house. While the crocodile was holding his limb, he asked his mother for her approval to let him become a sanyasi. Her mother agreed, and thus began the journey of Adi Shankara as how we know it today.

An early 8th-century Indian Philosopher and theologian, Adi #Shankaracharya is credited for consolidating the doctrine of Advaita Vedanta. He unified and established the current thoughts in Hinduism. #shankaracharyajayanti pic.twitter.com/PuuLXXRpEs

Adi Shankaracharya Jayanti is observed as the birth anniversary of an Indian Guru and philosopher Adi Shankara. He compiled Advaita Vedanta and revived it at a time when Hindu culture was on the decline.#AdiShankaracharyaJayanti #Hinduism #mondaythoughts pic.twitter.com/HbWIlg3FPJ

Wishing You All a Happy Shankaracharya Jayanti

Today is Adi Shankaracharya Jayanti, let us offer our humble salutations to him pic.twitter.com/FGarvBEMpb

Accept The Greetings of The Day

(The above story first appeared on LatestLY on May 17, 2021 10:37 AM IST. For more news and updates on politics, world, sports, entertainment and lifestyle, log on to our website latestly.com).