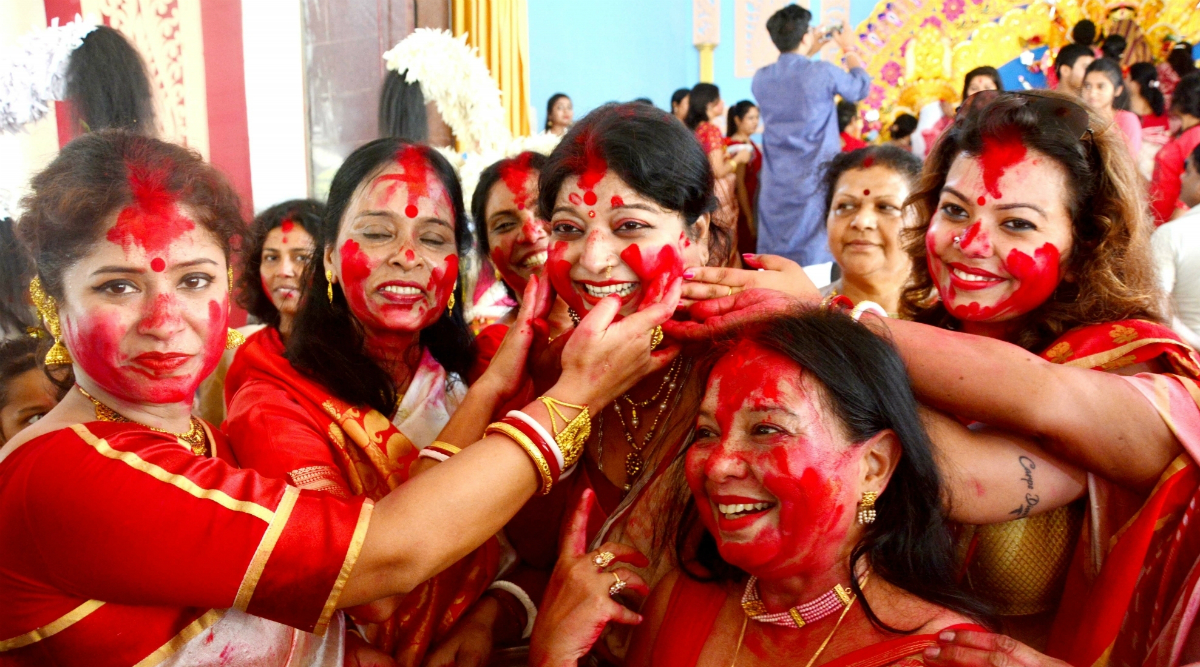 Happy Bijoya to one and all! The tenth of Navratri aka Durga Pujo (for the people in the Eastern region) is here. But before that, Vijaydashmi cannot end without the magnificent event of sindoor khela also spelt as sindur khela. As the name suggests in the Bengali language, the phrase means sindoor (Vermilion) play. Sindur Khela forms an important part of the Bengali-Hindu tradition where women smear each other's faces with sindur. This also marks the conclusion of the worship ritual of Maa Durga- Durga Puja. The women first apply vermilion to the Goddess on the feet and forehead and offer prayers. After which they apply sindur to each other on the forehead, face, cheeks and also shankha(white bangles) that is considered almost equivalent to mangalsutra. Durga Puja 2019: From Widows And Eunuchs Playing Sindoor Khela to Sex Workers Getting Their Own Pujo, Durga Puja Stands For Inclusivity.

Bijoya (Vijaydashmi) includes prayers and ritual worship offered to Maa Durga concluding with the Visarjan Puja. After this, married women bid farewell to the Goddess as a part of a ritual called Devi Baran. This leads to sindoor khela, which sees women dressed in white saris with red borders and traditional jewellery smearing the goddess' forehead and feet with vermilion. The women also perform arati and offer prayers to Maa Durga.

The idea is to wish each other good fortune and happy married life. Sindoor Khela is also a way of sharing Goddess Durga's blessing with each other. The tradition initially starts with paying respects to Maa Durga and in no time turns into a fun game of Holi where women begin to smear each other's faces with vermilion. Sindur Khela signifies the power of womanhood. It reflects the strength of women and how she can in no time turn into Maa Durga when it comes to protecting her family from evil. Women seek blessings on this day for her husband and family. On this day, petty issues between neighbours and relatives are forgotten.

Initially, unmarried women and widows were barred from participating in the ritual. However, soon, as the times changed, all kinds of women, whether married, widowed, transgender individuals or sex worker, nobody can be barred from playing with Sindoor. Not only does this show progressive thinking but kindness as well.