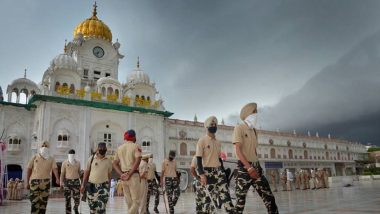 The Akal Takht Sahib’s foundation day was celebrated on July 2 when Baba Buddha ji and Bhai Gurdas ji completed the construction of the platform. Originally known as Akal Bunga, the building directly opposite to the Harmandir Sahib (Golden Temple). The Akal Takht Sahib was constructed as a symbol of political sovereignty and where spiritual and temporal concerns of the Sikh people could be addressed. Sri Guru Hargobind Sahib ji 425th Parkash Purab: Remembering Sixth Guru of Sikhs, Who Pioneered Concept of 'Miri Piri', on His Birth Anniversary.

Along with Baba Buddha and Bhai Gurdas, the sixth Sikh Guru built a nine-foot-high concrete slab. When Guru Hargobind revealed the platform on June 15, 1606, he put on two swords – Miri and Piri, which indicates his temporal authority and spiritual authority respectively. The sixth guru used to sit at the Akal Takht and administer justice as the Sacca Patshah. A court was used to be held at the Akal Takht Sahib by Sri Hargobind ji. Hari Singh Nalwa, a general of Maharaja Ranjit Singh, , decorated the Akhal Takht with gold.

Shiromani Gurdwara Parbandhak Committee (SGPC) and the Sikh Sangat celebrate the day with great fervour and enthusiasm. Akhand Path Sahib and Gurbani Kirtan darbar is organised every year in the Akal Takht on its Foundation Day. All the Jathedars of the holy place attend the event.

(The above story first appeared on LatestLY on Jul 01, 2020 10:00 AM IST. For more news and updates on politics, world, sports, entertainment and lifestyle, log on to our website latestly.com).