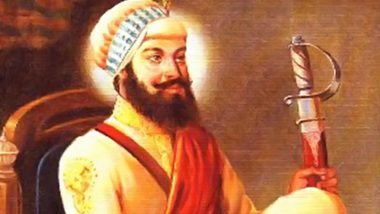 According to the sixth guru, Sikhs should also defend themselves against the oppressors with the power of sword and military might. Guru Hargobind Ji was born on June 19, 1595, to Mata Ganga Ji and the fifth Sikh Guru Sri Guru Arjan Dev Ji in Wadali Guru, a village 7 km west of Amritsar. He is the only son of Sri Guru Arjan Dev ji. Guru Tegh Bahadur ji Parkash Purab 2020: Remembering Ninth Guru of Sikhs Also Known as 'Hind Di Chadar' on His 400th Parkash Utsav.

After military conflicts with Shah Jahan’s forces, Guru Hargobind Sahib ji moved to Kiratpur Sahib, the foothills of Shivalik Hills, from Amritsar in anticipation of another from Mughals. He strengthened his defences in Kiratpur Sahib, where he spent his remaining life. Sri Guru Hargobind Sahib ji left for heavenly abode on March 19, 1644. Bandi Chhor Divas, which is celebrated by Sikhs on Diwali, is celebrated in memory of Guru Hargobind ji's compassionate act of getting 52 Hindu kings released from Emperor Jahangir's prison in Gwalior.

(The above story first appeared on LatestLY on Jun 05, 2020 03:15 PM IST. For more news and updates on politics, world, sports, entertainment and lifestyle, log on to our website latestly.com).