Before you head out to see the first full moon of summer, here are some interesting facts about the moon that also goes by names such as Berries Ripen Moon, Birth Moon, Blooming Moon, Egg Laying Moon, Hatching Moon, Green Corn Moon, Hot Moon, and Hoer Moon. 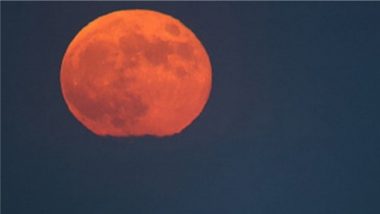 Full Strawberry Moon 2021: Tonight you will witness the last supermoon of the year known as Strawberry Moon and if you're hard-pressed for the time, you can probably catch it in one of the three days since it's estimated to be around for a while. Full Strawberry Moon 2021 will be visible in India from June 25 at midnight and reach peak brightness around 12.10 AM IST. So far it's been a month of spectacular celestial events that has fascinated and enthralled sky gazers across the world. The Strawberry Supermoon, however, will be widely awaited and watched since it's the last celestial supermoon phenomenon on the horizon.

While the world awaits with bated breath for a moon with the prettiest name, you might find it surprising to know that moon wouldn't bear any resemblance to its namesake. Before you head out to see the first full moon of summer, here are some interesting facts about the moon that also goes by names such as Berries Ripen Moon, Birth Moon, Blooming Moon, Egg Laying Moon, Hatching Moon, Green Corn Moon, Hot Moon, and Hoer Moon.

1. The name doesn't go with the face of the moon

Strawberry Moon might have a reddish hue but it doesn't bear an uncanny resemblance to the fruit. The name is derived from the Algonquin tribes of the northeastern United States and parts of eastern Canada. who reportedly harvested strawberries around this time of the year.

2. It's the smallest full moon referred to as mini-moon

Although this moon is considered a Supermoon, it's fairly small in size since it is at its farthest orbit away from Earth. It is also referred to as Mini Moon and appears 14% smaller at a distance of 361,594 km.

3. The Strawberry Moon cannot be seen more than once a year

Although there are four full moons in a year, the strawberry moon can only be witnessed once a year. Or to be more precise it can be seen in about a year, one month, and 18 days.

4. It's visible to the naked eye

Unlike the other supermoons, the strawberry moon does not require any special equipment. It's perfectly visible from a human vantage point unless you're city is prone to pollution and hazy skies. In that case, move somewhere closer to the countryside or outside the city limits.

5. It will be around for three days

Owing to the various time zones and the moon's orbit around the earth, the moon will be around for three days.

Strawberry Supermoon On June 24: All About 2021's Last Supermoon This Full Moon Day

In case you cannot find the time to step out or are unable to see the event due to unclear skies, you can live stream the celestial phenomenon on Thursday, 24 June at 3:00 pm EDT or Friday, 25 June at 12:30 am IST on Virtual Telescope Project website.

(The above story first appeared on LatestLY on Jun 24, 2021 02:48 PM IST. For more news and updates on politics, world, sports, entertainment and lifestyle, log on to our website latestly.com).