Strawberry Moon 2021 Visibility Time in India: Date, Timings in IST, Location & Other Important Details About Last Supermoon of The Year

The first full moon of summer 2021, the Strawberry Moon will appear in the night sky on June 24, 2021. Read on to know more about the phenomenal celestial event. 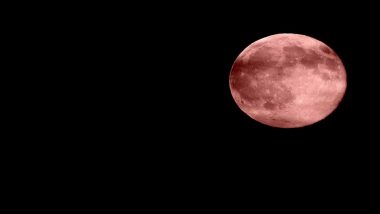 What is the Significance of the Name?

The celestial event got its name from ancient American tribes who marked June’s full moon as the beginning of the harvesting season for strawberries. Strawberry moon is also known as Birth Moon, Honey Moon, Mead Moon, and Blooming Moon. However, June’s full moon coincides with the beginning of the summer season in the Northern Hemisphere; thus, it is referred to as the Hot Moon.

When will the Strawberry Moon Appear?

Unlike the normal moon when the full phase lasts for a day, the Strawberry moon will appear in the night sky for more than a day. Normally, in between the Summer Solstice and Equinox, there are three full moons. However, this year, there are four such phases.

Sky gazers can enjoy the beauty of Strawberry Moon on June 24 at midnight, around 12.09 AM IST (Indian Standard Time). The moon is going to be visible for next three days and expected to be 14 percent bigger and 30 percent brighter.

How will the Strawberry Moon Appear in the Night Sky?

The Strawberry Moon will appear as a pink or red ball, and gradually it will turn into a yellow-coloured ball while inching above the horizon. It will appear very bright once it’s high in the sky.

The coincidence of the Strawberry Moon with the Summer Solstice happens once in 20 years. Now, after the Strawberry moon on June 24, the stargazers will witness the next full Moon known as Buck Moon on July 24. Then they can also witness Sturgeon Moon on August 22, followed by the last full moon of the season, Harvest Moon, on September 20. When the day and night will be of equal length, the equinox will occur on September 22.

(The above story first appeared on LatestLY on Jun 24, 2021 03:08 PM IST. For more news and updates on politics, world, sports, entertainment and lifestyle, log on to our website latestly.com).