When Is Son's Day 2020? From Men's Day to Father's Day to Boyfriend's Day, Here's The Full List of Dates of Events Dedicated to the Males in Our Society

Every year, a weird trend is witnessed that most people search for when is son's day on daughter's day, when is men's day on women's day, so on and so forth. Basically, on the day women in any form are celebrated like, mother, sister, girlfriend, daughter, etc., people somehow end up searching for the days dedicated to the male counterpart. 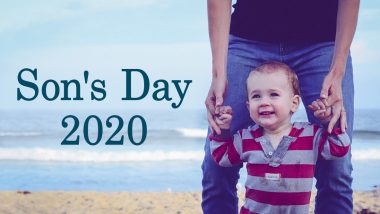 Every year, a weird trend is witnessed that most people search for "when is son's day" on daughter's day, "when is men's day" on women's day, so on and so forth. Basically, on the day women in any form are celebrated like, mother, sister, girlfriend, daughter, etc., people somehow end up searching for the celebration for the male counterpart of the day. So if you are looking for the list of days to celebrate men like son's day, brother's day, men's day, father's day, boyfriend's day, husband's day, grandfather's day, boy's day, etc. Here's something you might want to refer. When is National Son's Day 2020? Know Date and Significance Dedicated to Honour the Boy Child in Your Family!

When is National Son's Day?

Yesterday aka September 27 when everyone was celebrating the daughters today on Daughter's day, a constant query to know when does the observance of Son's Day appeared. National Son's Day is celebrated on March 4 while some people say it is marked on September 28. Based on the difference in location the dates vary. But the idea is to celebrate the boy children. Daughter's Day 2020 Dates From India to the US to Canada! Know When Daughters Day is Celebrated in Countries Around the World.

When is Brother's Day?

National Brother's Day is celebrated on May 24 in the United States annually and this day is said to have founded by C. Daniel Rhodes of Alabama to celebrate brothers and their strong bond.

When is International Men's Day?

Every year on International Women's day most searches come up as When is International Men's Day? Well, it is celebrated annually on November 19. The worldwide commemoration takes place to focus on the efforts towards the welfare of men. The day was inaugurated in 1992 by Thomas Oaster.

When is Father's Day?

The most popular date for Father's Day is the third Sunday in June. However, in Spain, Italy and Portugal, Father's Day is celebrated on March 19, which is the Feast of St. Joseph who is the patron saint of fathers.

When is Boyfriend's Day?

When is Husband's Day?

The third Saturday in April is celebrated as Husband's day and is almost like Valentine's Day for the husbands. It is also known as Husband Appreciation Day and this holiday is dedicated to the men who constantly love their wives.

When is Grandfather's Day?

There is no particular grandfather's day celebrated but the grandpas around the world are appreciated on National Grandparents Day. It falls on Sunday, September 13 in the United States.

When is Boy's Day?

International Boys Day is observed on May 16 every year dedicated to the boys and their wellbeing. It is a day people look to spending special time with son(s) and grandsons.

(The above story first appeared on LatestLY on Sep 28, 2020 11:05 AM IST. For more news and updates on politics, world, sports, entertainment and lifestyle, log on to our website latestly.com).