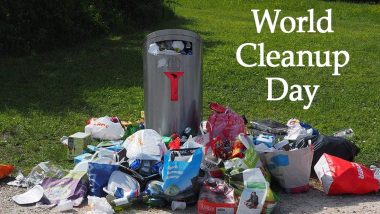 It's the World Cleanup Day today. Observed every year on the third Saturday in month of September, this day is an annual global social action program that combats the problem of solid waste, including the marine debris. From its beginning by an Estonian organisation called Let's Do It! it has grown into a global movement with participants from more than 100 to 150 countries. The main aims or celebration of this involves organising cleanup drives to collect solid waste and create awareness about this waste management. On this day, we tell you more about the history and significance. Photographer Captures Shocking Images Showing Impact of Improper Mask Disposal on Wildlife! Here's How to Dispose off PPE Kits & Latex Gloves Right Way to Protect the Environment.

The idea of World Cleanup Day emerged in the North European country of Estonia, in 2008. On this day, over 50,000 people united to have a cleanliness drive around the country. Within 5 hours of cleanup they had made an impact over the globe. Seeing the response, the civic movement spread around the globe. More than a decade later,  it became a global movement with millions of volunteers. The simple act to clean up an area bounded people together working towards the same goal. Today, Let’s Do It World (LDIW) is a global organization that unites more than 150 countries. World Cleanup Day is the biggest event organized by LDIW.

On this day, every country announces their concerns about surrounding waste and to deal with it. World Cleanup Day aims to raise awareness of the mismanaged waste crisis by mobilizing all spheres of society to participate in cleanup actions. LDIW also provides guidance on how to go about it for those who are interested in committing to the cause. From beaches to landmines, there are several cleanup events with the help of governmental and non-governmental organisations which are organised for this day.

The focus of this year's movement in Estonia is the problem of discarded cigarette butts, a very common part of waste around the world. Despite the pandemic, millions of volunteers have signed up for today's event.

(The above story first appeared on LatestLY on Sep 19, 2020 07:10 AM IST. For more news and updates on politics, world, sports, entertainment and lifestyle, log on to our website latestly.com).