Anxiety vs Depression: From Physical Symptoms to Similarities in Treatment Styles, Learn About Two Most Common Mental Illnesses 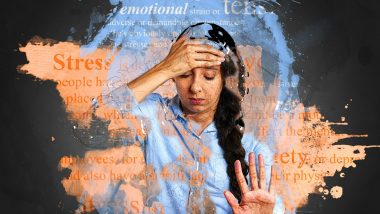 Depression and Anxiety are now two of the most common mental illnesses found among most people. Both are normal emotions to experience, routinely occurring in response to high-stakes or potentially dangerous situations (in the case of anxiety) or disappointing, upsetting circumstances (in the case of depression). Anxiety and depression can occur sequentially i.e one in reaction to the other, or they can co-occur, in the sense that anxiety can often cause depressive states and depression can often lead to anxiousness.

It is also often said that both these illnesses share a common biological basis. Low serotonin levels are thought to play a role in both, along with other brain chemicals. While the biological underpinnings of these problems are similar, anxiety and depression are still experienced differently. Are Depression and Anxiety Real Illnesses? Mental Health Queries Answered to Help You Decipher Fact from Fiction!

While depression and anxiety are two different medical conditions, their symptoms, causes, and treatments can often overlap. Hence, it is important to distinguish between the two for an accurate diagnosis.

It is important to note that a key difference between both these illnesses is that one refers to a single illness, whereas the other refers to a group of conditions. Essentially, depression is one illness. Although it has lots of different symptoms, and may feel different for different people, the term still refers to a single condition. On the other hand, anxiety is considered to be an umbrella term that encompasses a range of more specific conditions, some of which include phobias, panic disorders and stress reactions.

Anxiety and depression are similar in that their main defining symptoms relate to someone’s mood and feelings, but they also have physical manifestations. Anxiety, Depression About Contracting COVID 19 Among Patients With Pre-existing Mental Health Conditions on a Rise.

There are quite a few physical symptoms that appear in anxiety as well as depression, such as:

However, there are also some physical symptoms that are common.

People with depression may also:

People with anxiety may also:

When it comes to depression and generalised anxiety disorder, one clear similarity is the way they are treated. For both conditions there are two main categories of treatment: psychological therapies and medications.

Psychological therapies involve talking through your thoughts and feelings with a qualified professional. An example of this is cognitive behavioural therapy, which aims to address the way your thoughts, feelings and behaviours interact.

Medications known as antidepressants are used for both conditions and are effective for many people.

Often, a treatment approach will involve a certain combination of both psychological therapies and medicines. This approach will be tailored to the individual and their specific situation and needs. The doctor may also look to address lifestyle issues as well as other contributing factors as part of the treatment, if they think these may be contributing to the depression or anxiety.

Having said that, it is possible for a person to assess the severity of their symptoms. They can do this by tracking their physical or psychological symptoms for a week or two to get an accurate representation of fluctuations in mood and anxiety. They can also ask themselves some key questions about how much their symptoms are getting in the way of their day-to-day functioning. It is also possible for them to ask close friends or family members if they have noticed changes in their behaviour, and if so, what those changes are.

In conclusion, anxiety and depression are two very different conditions. However, with the overlap of their symptoms, the fact that they can appear together, and the similar approaches to treatment, one can see why they are often mentioned side-by-side. It then becomes crucial to reach out and seek help or talk to a professional to get a clear and accurate diagnosis, as well as early treatment and prevention, so that the symptoms do not worsen.

(Contributed By: Aviva Damania, Psychologist and Mental Health Specialist from City, University of London. She can be reached out at The Mind Essentials.)