Arjun Kapoor Opens Up About His Physique and Diet, Says ‘In the Last Three Months I Have Managed To Do Two Bootcamps’ (Watch Video)

Meanwhile, on the film front, Arjun's latest release was Bhoot Police which also starred actors Saif Ali Khan, Jacqueline Fernandez and Yami Gautam in lead roles. Arjun's massive physical transformation will be evident from his new films like Ek Villain 2, Kuttey, among others. 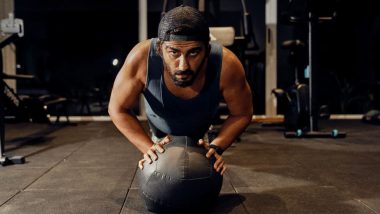 Bollywood actor Arjun Kapoor, who has been pushing his body to achieve the desired physique, revealed that he recently travelled outside Mumbai to do two intense bootcamps with his trainer Drew Neal. Arjun's massive physical transformation will be evident from his new films like 'Ek Villain 2', 'Kuttey', among others. Arjun also shared a video detailing his day at the bootcamp in Alibaug and revealed the diet he is on. Arjun Kapoor Opens Up About Regaining Fitness After His Recovery From COVID-19 (View Post).

"Just a day in my life when I'm not out working but I'm still working out," he captioned the post. "I'm in a good space right now trying to push my body as much as possible so that I can be the best version of myself. I'm a work in progress and I will always be one. I have no shame in admitting that given my condition, I have to work twice as hard than others. It is what makes my resolution even stronger and I'm currently thriving in this feeling," said the '2 States' actor, who has been getting widespread love from every quarter due to his physical transformation. Arjun Kapoor Shares a Workout Video As He Opens Up About His Venturing Into Food and Fitness Space – WATCH.

"In the last three months, I have managed to do two bootcamps with my trainer Drew Neal. He has taken me out of the city and we have spent over two weeks, per bootcamp, trying to achieve the best results. I'm only thankful to Drew for believing in me and for motivating me to reach higher," added Arjun.He further said, "I have also been sticking to the discipline of eating the same food for a long duration and created consistency. I will continue to work harder towards making myself better and fitter in the days to come."

Meanwhile, on the film front, Arjun's latest release was 'Bhoot Police' which also starred actors Saif Ali Khan, Jacqueline Fernandez and Yami Gautam in lead roles. Produced by Ramesh Taurani and Akshai Puri, the movie was released on Disney+ Hotstar on September 10. Arjun will next be seen in 'Ek Villian Returns' and 'Kuttey'.