Can Lychees Be Poisonous? Litchis Linked to Encephalitis Deaths in Muzaffarpur – How to Eat This Fruit Safely

Does lychee or litchi lead to encephalitis and death? Here's what studies say. 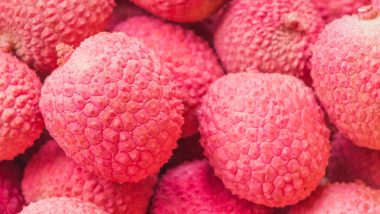 Lychee or litchi is a fruit of Chinese origin. The juicy fruit with a translucent white flesh, flowery flavour and leathery pink peel is a summer favourite. Litchis are as nutritious as delicious. They are a good source of vitamin C, copper, potassium, and antioxidants epicatechin and rutin. But in recent years, litchi has received a lot of bad press after it was linked to children’s encephalitis deaths in the Indian city of Muzaffarpur. Ever since then, people have been sceptical about buying litchis, thinking they may be poisonous. Studies on the subject have revealed contrasting results. Here’s what you should know about eating litchis.

There have been cases in the past two decades where healthy children who consumed litchi died of sudden seizures. Around mid-May, hospitals see a surge in admissions where children with no prior medical issues are brought in with health complications. Woman Dies After Drinking Bitter Lauki Juice in Pune! Here’s Why It’s Dangerous To Drink Bottle Gourd Juice.

In most cases, the children suffer from seizures and slip into a coma, and 40 percent of them die. According to a New York Times report, it was believed that the children died due to heat stroke in summer or through vector-borne infections.

But a joint investigation carried out by the Indian National Centre for Disease Control and Centers for Disease Control and Prevention determined that the children had died of eating litchi fruit. The researchers studied 390 children in Muzaffarpur who had taken ill with acute encephalitis syndrome, a brain inflammation. Is Drinking 8 Glasses of Water Good for Health? 60% of People Believe in This Myth.

The children younger than age 15, who were mostly from poor families and malnourished, had eaten litchi on an empty stomach. The study published in The Lancet said that 62 percent of the children admitted had blood glucose concentration of 70 mg/dL or less. These children had also not had an evening meal.

The study found the presence of a toxin called hypoglycin, which lowered blood sugar in children who already had low glucose levels since they weren’t having evening meals.

But months after The Lancet study, another one published in The American Journal of Tropical Medicine and Hygiene found that the litchis themselves weren’t to blame but the pesticides used on them.

The real culprit was endosulfan, a controversial pesticide that is being phased out globally.

The researchers who undertook the study said that litchi trees in the area were treated with the toxic pesticide. Most of the children who were affected consumed unwashed fruits.

They also happened to peel off the skin of the fruits with their teeth. The case-control study said that eating lychee wasn’t linked to encephalitis. The deaths were linked to the agrochemicals used on the litchi trees.

How To Eat Litchis Safely

Despite the deaths in Muzaffarpur, eating litchis elsewhere in the country didn’t result in fatal consequences. But parents who are afraid to give their children the delicious and nutritious fruits don’t have to worry.

If it’s the hypoglycin that’s causing the encephalitis, doctors advise the parents to not feed litchis to their children on an empty stomach. More importantly, children should be fed their evening meal before they are given litchis to eat. Unripe litchis should be discarded.

Experts also warn against eating litchis when you are on a fast.

Once peeled, wash the white flesh of the litchis thoroughly before serving them.

(The above story first appeared on LatestLY on Jun 07, 2019 10:50 AM IST. For more news and updates on politics, world, sports, entertainment and lifestyle, log on to our website latestly.com).