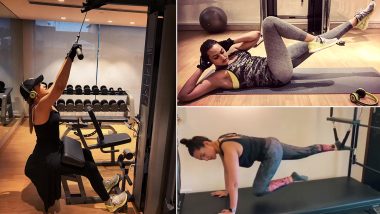 Sonakshi Sinha turns 33 years old on June 2, 2020. She is a renowned actress in the Indian film industry. Sonakshi made her Bollywood debut in the year 2010 from the movie Dabangg for which she received Filmfare Award for Best Female Debut. The actress is known for her fashion sense and glamour quotient. On the occasion of Sonakshi Sinha's birthday, let's take a look at her workout and diet that keep the Bollywood diva fit and healthy. Sonakshi Sinha Posts a 'Sunday Selfie' on Wednesday Because That's Lockdown Life! (View Pic)

Sonakshi Sinha, who is about to complete a decade in Bollywood, has gotten in shape year after year. In her very first movie, she lost around 30 kg to perfectly fit into the character of Rajjo opposite Salman Khan. During her teenage, the actress was chubby and her "love for junk food was limitless". Over the years, Sonakshi has indeed transformed herself drastically and now lists amongst the fittest actresses in Bollywood. Sonakshi Sinha Becomes Shotgun Jr and Shuts Up Haters Who Quizzed Her On Ramayan During Her AMA Session With Fans.

Sonakshi Sinha begins her day with cardio exercises on an empty stomach. As per Vogue, her cardio mostly includes StairMaster for thirty minutes followed by brisk walking for about 20-25 minutes. Apart from this, Sonakshi also does Pilates to keep her muscles and core well-toned. The Rowdy Rathore actress loves performing exercises on Pilates reformer machine, which works effectively on glutes, hamstrings, abdominal muscles and also helps develop body balance and coordination. Sonakshi Sinha also incorporates Yoga in her training routine to keep herself super-fit.

Coz dabbing with your arms is too mainstream. #legdab #headstand #yoga #coreworkout #balance #mondaymotivation #sonaisfit

In an interview with Hindustan Times, Sonakshi Sinha revealed that she loves to eat homemade food. The actress eats oats with scrambled eggs for breakfast. For lunch, she prefers dal and a vegetable with some gravy, fish or chicken. Sonakshi doesn't include carbohydrates in her dinner and her final meal mostly includes dishes high in protein. Apart from this, the Bollywood actress munches a few almonds and walnuts in between meals to avoid keeping her stomach empty for longer hours.

Sonakshi Sinha was last seen in Dabangg 3 which released in December, 2019. We wish the gorgeous Bollywood actress a very Happy Birthday, and hope that she is blessed with good health and comes up with more blockbuster movies in years to come.

(The above story first appeared on LatestLY on Jun 02, 2020 08:00 AM IST. For more news and updates on politics, world, sports, entertainment and lifestyle, log on to our website latestly.com).