Ayush Gupta, who is the youngest Reiki healer of India is an expert in healing body through positive energy. At a very young age of 12, he learnt Reiki after which he started treating his family members through his therapy at ‘Sadguru Healing Centre’ in Madhya Pradesh. 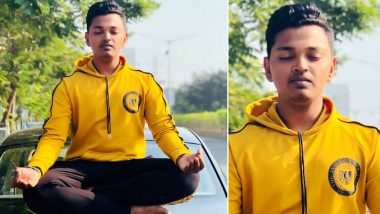 Reiki healing is one of the unexplored terms which many people are not aware of. It is a special kind of treatment that works on different levels of a person, be it physical, emotional, mental or the spiritual development of a person. With building body positivity, it aims to reduce stress and gradually improve the overall health of a person. Ayush Gupta, who is the youngest Reiki healer of India is an expert in healing body through positive energy. He was born on September 3, 2002, to Kashi Prasad Gupta and Sushma Gupta in Jabalpur, Madhya Pradesh. At a very young age of 12, he learnt Reiki after which he started treating his family members through his therapy at ‘Sadguru Healing Centre’ in Madhya Pradesh.

Giving all the credits to his father for his achievements, Ayush expressed his gratitude and said, “I am really thankful to him for motivating me to learn Reiki. It was he who introduced me to grand-master Devank Shuklaji from whom I learnt Reiki in detail. My parents have been my pillar of strength and whatever I am today is all because of their blessings.” On April 12, 2014, Ayush set a new world record by becoming the youngest Reiki healer in India. His therapy sessions have worked big time and till now he has healed more than 250 patients across the country. Currently, the 17-year old is operating ‘Ayush Reiki Healing Centre’ in Mumbai and celebrities including Remo D’Souza, Ravi Dubey, Nikul Desai, Shankar Mahadevan, Shobhit Sinha among others are his clients.

Moreover, Gupta very often organises a lot of training workshops in different parts of India. People from every nuke and corner of the country are impressed by his healing techniques. His mission is to make Reiki available to people in its purest and traditional form. Besides this, he is currently working on his first Hindi book on Reiki which is titled, ‘Reiki – Bramhaand Ki Rahasyamaii Urja’ which he plans to launch soon. His book is said to have the best therapy solutions on how to deal with problems harming people’s body and soul. At 17, the young guy has made big names like Amitabh Bachchan a fan of his work and the Bollywood legend even appreciated Ayush on the TV reality show, ‘Kaun Banega Crorepati’. All we can say that you have a bright future, Ayush Gupta!