Surya Grahan Time And Mahurat of Sutak of Today's Partial Solar Eclipse; How & Where to Watch 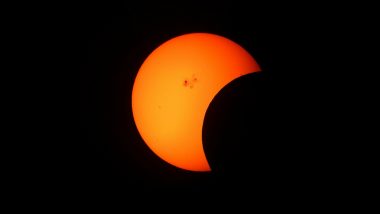 Today's partial solar eclipse is likely to play out over northern Canada, north-eastern US, Greenland, Scandinavia, most of Siberia, and some parts of central Asia. To the people in these areas, do not attempt to watch solar eclipse with your naked eyes. During an eclipse, undue radiation of ultraviolet and infrared light disperse into space. Therefore, to avoid such exposure, viewers should  wear special solar eclipse glasses.

(The above story first appeared on LatestLY on Aug 11, 2018 11:33 AM IST. For more news and updates on politics, world, sports, entertainment and lifestyle, log on to our website latestly.com).