Trisha washed her dirty laundry in public with a 15-minute long video where she bashed Gabbie for telling Jason about Trisha's herpes. Now whether or not Trisha really had herpes no one knowns, but in her video, Trisha said that she doesn't trust Gabbie because she had told Jason that Trisha had herpes. 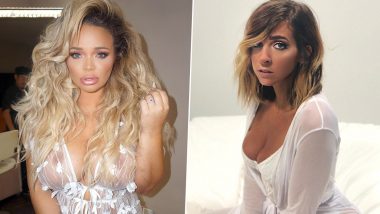 Tuesday is here, and so are we with some piping hot TEA! So as you know,  Gabbie Hanna has controversies following her wherever she goes, and Trisha Paytas is no less. Trisha washed her dirty laundry in public in a 15-minute long video where she bashed Gabbie for telling Jason about Trisha's herpes. Now no one knows whether Trisha really has herpes or not. But in her video, she said that she doesn't trust Gabbie because she had told Jason that Trisha had herpes. Tea Tuesday: From James Charles Perfectly-Timed YouTube Series Launch To 'Hair' Found In Shane Dawson and Jeffree Star's Conspiracy Collection, All You Wanted To Know.

Trisha Calls Out Gabbie For Telling Jason She Had Herpes

"When me and Jason started hooking up in 2017 and (Gabbie) told him 'hey, be careful, Trisha has herpes and you're sleeping with her,'" Trisha quoted Gabbie in the video. While Trisha seemed extremely angry she gave a sceptical look to the camera that was followed by "Gabbie: Have we slept together? ... Did I show you my STD results? Are you my doctor?" She called Gabbie out for spreading rumours about Trisha's Herpes.

Gabbie maybe a hundred things, but she is not someone who won't admit her mistakes. Gabbie reportedly took a poll on her Instagram asking her followers if "it's wrong to inform a friend about their partner's potential STD status." With this, she not only confirmed that she did tell Jason that Trisha has herpes, but also she thought it was the right thing to do initially. And now that she is called out, she is confused. Well, at least she didn't lie.

"Here's where I'm coming from, if I'm sleeping with somebody, and one of my friends knew, from a close source of that person, that they had an incurable STD, and they had that information, and we're like 'hey, just be careful, check it out, talk to them about it,'" Gabbie said.

Take a Look At Gabbie's Tweets:

i blocked trisha on everything bc as soon as i did what she wanted, she quote tweeted my apology last night & carried on for more attention even tho she txted me that everything was fine. she clearly wants drama & ive said sorry. there are more problems in this world than this. https://t.co/nBPDAO4oeG

Unlike Jaclyn Hill, Jeffree Star Responds To 'Hair' In His Pallete

Unlike Jacklyn Hill who never got back to the backlash she faced for releasing faulty "hair"-embedded lipstick, Jeffree Star responded to the customer on his eyeshadow palette controversy. Not only did he apologise to his customers but also explained why there was hair int he palette. Shane Dawson and Jeffree Star's Conspiracy Collection created a huge buzz online, so much so that they were sold out within 30 minutes of the launch. However, some fans have found hair-like things in the eyeshadow palette. The customers were baffled but Jeffree explained that they were ribbon fibres embedded in their products. This is from the same anticipated conspiracy collection that caused Jeffree Star's Shopify site to crash within minutes because of the high demand. Read about it in our last Tuesday Tea.

Hey everyone, it’s come to our attention that a few dozen people out of 1.1 million palettes produced, have a few ribbon fibers embedded in their products. The lab has done a full investigation & we found the issue. I pride myself on quality and fully apologize for this error 💯 pic.twitter.com/8Hn9ndzFsa

He also shared a clip from the lab that shows how the eyeshadows are pressed.

Here is a clip from the lab of how we press the eyeshadows. Moving forward my manufacturer will make sure this never happens again and have put in place several precautions and steps to avoid the ribbon issue. You all know how serious I take my company, thank you for listening ⭐️ pic.twitter.com/jtXRWjPBnl

That's all about this weeks tea. We are yet to see what Jason has to say about the whole Trisha and Gabbie's feud and whose side does he take. In case of Jeffree Star, he is busy with the fifth anniversary of Jeffree Star Cosmetics this week and is launching new products. He revealed that he would be bringing back the original five shades from the very first Christmas collection.

(The above story first appeared on LatestLY on Nov 26, 2019 08:30 AM IST. For more news and updates on politics, world, sports, entertainment and lifestyle, log on to our website latestly.com).