Sanjana did the feat on the occasion of Independence Day, August 15. The South Asia Archery Association (SAAA) have documented her efforts and have submitted all details to the Guinness, in order to give her official recognition. 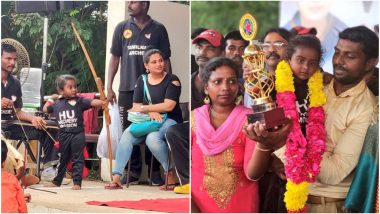 Attempting for the Guinness World Record needs a lot of diligence and a 3-year-old girl from Chennai proved she had it. P Sanjana, a lower kindergarten student attempted to secure her place in the coveted list by shooting 1,111 arrows in a span of 3.5 hours! She hit the target 8 metres away and her persistence has won her much appreciation.

Sanjana did the feat on the occasion of Independence Day, August 15. The South Asia Archery Association (SAAA) have documented her efforts and have submitted all details to the Guinness, in order to give her official recognition. The little girl did so, for 3.5 hours and rarely missed the target. While talking to NDTV about her feat, she was quoted, "I am happy. I've no pain and I'm not tired. My dream is to win a gold in Olympics." She really has big dreams and her focus on them was seen well. Akshay Ahuja's Robochamps Enters Guinness Book of World Record.

P Sanjana took just five minutes break after every hour. Although she was tired by the end of it, she did not want to give up. Coach Shihan Hussaini has been training her and he knows she is a child prodigy in the making. Talking about him imparting training to her, he was quoted in a news report, "It was a challenge for me to train Sanjana. She is only the second youngest student whom I have trained. I have never seen this kind of obsessive fixation for shooting. She is definitely going to be an Olympian in the future." World's Longest Ice-Cream: Giant Sundae sets Guinness World Record in Texas, US.

Sanjana's obsession with the sport began just a year ago when she received a bow and arrow as a gift. She loved it and it soon became her favourite. Her parents are definitely proud of her and plan to nurture in the direction to fulfil her Olympian dream. It is amazing to see a three-year-old have her goal sorted and is working equally hard towards to achieve it.

(The above story first appeared on LatestLY on Aug 19, 2018 09:34 AM IST. For more news and updates on politics, world, sports, entertainment and lifestyle, log on to our website latestly.com).