Dakoda Pitts really did not want to show up to school alone. And it was his first day back to school since his father who is a police officer was killed in the line of duty. 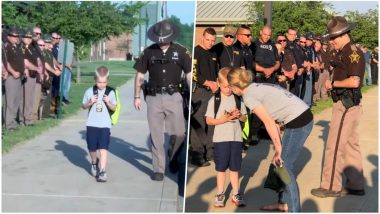 Police forces works throughout the year and round-the-clock to keep us safe. Apart from being serious and tracking down the criminals, many a time their heartwarming gesture towards the citizens have melted our hearts. Much like in a recent moment, when a five-year-old son of Rob Pitts from Indiana police department returned to school, and he was greeted by 70 police officers showing their support. Dakoda Pitts really did not want to show up to school alone. And it was his first day back to school since his father who is a police officer was killed in the line of duty.

It was reported that Dakota asked his mom if one of his dad’s fellow police officers could accompany him to Sullivan Elementary School in Western Indiana. But his father’s friends in blue had something else in their mind. 70 officers from Terre Haute Police Department and the Vigo County Sheriff’s Department, Indiana came to the Elementary School to welcome five-year-old Dakota. “Dakota asked his mom if one of his dad's friends could take him to school, so she reached out to Rob’s friends and families,” Terre Haute Police Detective Les Hamm told WTHI-TV.

Watch video of 5-year-old as he was accompanied by 70 police officers to his first day back to school!

SEA OF BLUE: 70 police officers escorted 5 year old Dakota Pitts to his first day back to school after his dad, Rob, a 16-year veteran of the Terre Haute Police Department, was killed in the line of duty. https://t.co/CeIqUvRD1W pic.twitter.com/D73sMp5Ov7

They lined the school as he went in. It was more than a gesture for the little one! SWAT (Special Weapons and Tactics) officers also presented Dakota with his own SWAT shirt and badge. “He will definitely know that his Dad was a hero. Blood doesn't always make family, but I think the ‘Blue Family’ went above and beyond,” Kelli Jones, Rob Pitts' sister told WTHI-TV.

Rob Pitts was a 16-year veteran of Terre Haute Police Department was killed in a shootout between police and a suspect on May 4 as they approached an apartment complex, according to the department. This act of kindness has warmed our hearts as the officers who came to the school wanted little Dakota to know that he will always have his back.

(The above story first appeared on LatestLY on May 16, 2018 01:17 PM IST. For more news and updates on politics, world, sports, entertainment and lifestyle, log on to our website latestly.com).