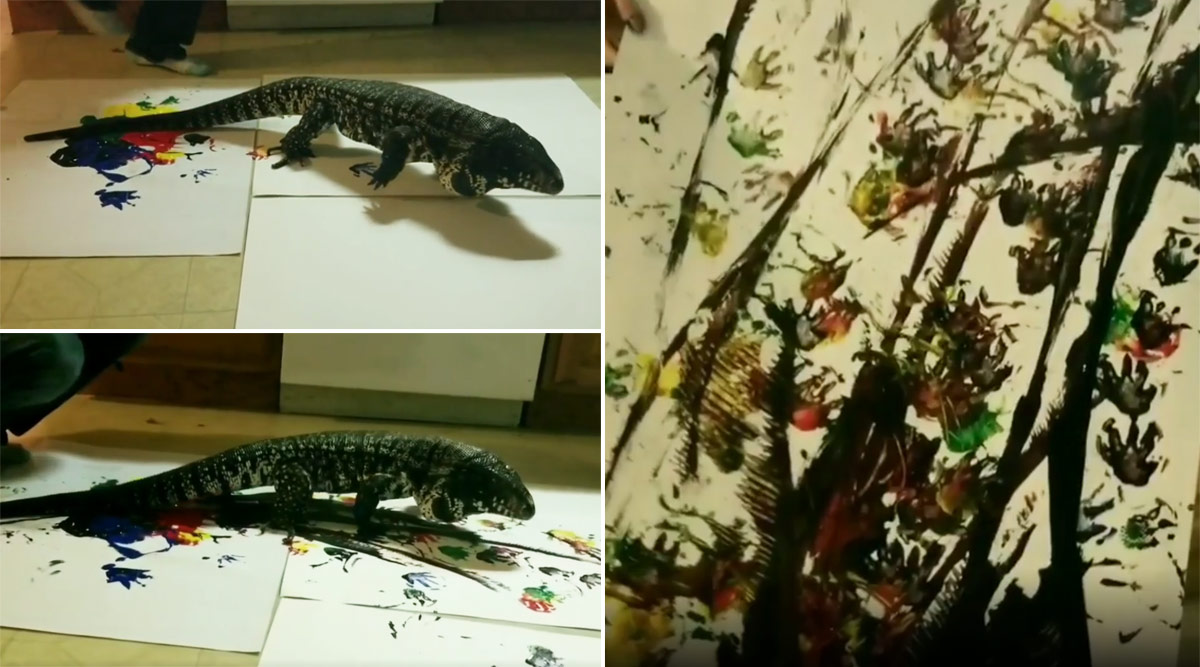 Australia’s hellish fire season has eased. But people are facing more than a single crisis. At least six firefighters were killed in New South Wales (NSW_ which saw the worst. Thousands of homes were damaged, and 25 people died in the fires since October, 2019. The wildfires are also blamed for having taken lives of over a billion animals. Amidst the crisis, individuals and state government are trying as much they can to raise donations for Australian Bushfire. A lizard fondly called Winston is also raising money for Australia bushfire relief. How? By dipping its claws into different paint colours, the lizard walks across a canvas, giving it excellent artistic shape. The pictures and videos of Winston and its paintings have garnered large attention on social media. Here’s How You Can Donate and Help Those Affected by Destructive Australian Wildfires.

The Argentine black and white tegu is reportedly owned by Sarah Curry from Lansing, Michigan. Sarah is a graphic designer, and she sells Winston’s artwork on Etsy. She has raised $2,000 in two weeks. CNN noted Winston to be 4 feet long and weighs 15 pounds. Sarah saw a local zoo do the same thing and wondered if it would be safe for Winston to try and paint. After checking with the vet, she got the right type of paint colours and was ready to try. The outcome, well, was quite messy, but beautiful on its own. ‘Taylor’ the Dog Goes Viral for Rescuing Koalas Sniffing Their Poop! Other Times Canines Helped Saving Animals From the Wildfires.

Fundraiser for Australia! Winston made some beautiful artwork last night. He was a bit slow since he is still in brumation mode. I'm just glad he decided to wake up to be a part of this good cause for a short while. All proceeds will go towards helping Australia. It is absolutely heart breaking seeing the damage done to their country. So many lives lost and so many without homes. We want to help as much as we can. I know we can't make millions but we will try our best. I will upload on etsy this weekend when I cut these down to size. PRICES 8x10 - $20 without frame $25 with frame 5x7 - $15 without frame $20 with frame 4x6 - $10 without frame $15 with frame Music: My Summer Love URL: https://icons8.com/music/

Winston was dumped off on a box at The Great Lakes Zoological Society. The lizard was in bad shape until the Michigan zoo nursed it back to health. When it shut down due to lack of money, Sarah adopted Winston in March, 2015.

View Pics of the Paintings!

Winston has prints for sale at a cheaper cost. Link is in the bio.

Sarah said that she had not chosen a charity to donate the money yet. But will soon find a way out to help the Australian fire victims. At the time of crisis like this one, it is virtuous to see such unique instances that stand out for humbly donating in the best possible way they can. The unprecedented scale and intensity of the fires this year is the result of climate change, scientists say.