A picture of the smartphone with a caption that states the weird incident has been shared online and netizens are amused. Many of them are calling it a call from the Hogwarts School of Witchcraft and Wizardry from the Harry Potter series. 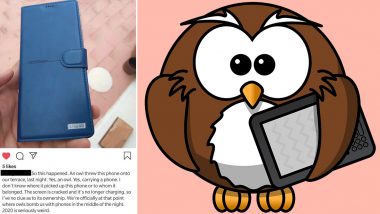 If you think you have seen enough in 2020, well there are six months yet to go and anything unpredictable can happen. Like, imagine, owls dropping phones on your balcony? Well, that sort of weirdness happened in Bangalore recently, when someone found a smartphone on their terrace which was apparently dropped by an owl. A picture of the smartphone with a caption that states the weird incident has been shared online and netizens are amused. Many of them are calling it a call from the Hogwarts School of Witchcraft and Wizardry from the Harry Potter series. Flying Sharks? Osprey Bird Caught Preying on a Big Fish on South Carolina Beach, Twitterati is Amused (Watch Viral Video).

A Twitter user shared a screenshot of an Instagram post which shows the dropped phone and the caption states that it was dropped by an owl. It reads, "An owl threw a phone into our terrace, last night. Yes, an owl. Yes, carrying a phone." It mentions that the screen is cracked and the phone cannot be charged so there is no way to find out just yet who this phone belongs to. The caption also states, "We're officially at that point where owls bomb us with phones in the middle of the night. 2020 is seriously weird." Well, don't we all agree with the last sentence?

A friend of mine in Bangalore has the story of the day. pic.twitter.com/avVYJvrYJj

The picture is now going viral and the story is definitely amusing, right? Twitterati can't help but relate it to Hedwig, the owl messenger from Harry Potter. Many have called it a sign of admission from the fictional school. Check some reactions below:

Is this a screecher? 😱

Hogwarts Got an Upgrade

Hogwarts has upgraded their invitational letter. The delivery channel is same though.

Wait For a Letter

someone was gifting that guy a phone and owl was very bad in carrying things... Ask him to wait for letter from Hogwarts...

what the hell. this is very shocking. 2020 is definitely weird.

It's The Owl's Phone

What do you mean you've no clue of it's ownership? It's the owl's phone. https://t.co/vfmstWgbSO

At this point, we do not know if it is an authentic incident. But Harry Potter would low-key like to believe it. This reminds us of an owl named Yoll who has been trained to deliver letters. Video of Yoll making a delivery went viral a couple of years ago. Now looks like, there's another Hedwig upgraded to phones. What do you think, could this be real?

(The above story first appeared on LatestLY on Jul 08, 2020 09:05 AM IST. For more news and updates on politics, world, sports, entertainment and lifestyle, log on to our website latestly.com).