Bhishma Pitamah Was 'Cooler' than You Thought! Viral Pic of Cooler on the Set of Mahabharat Is Making People Wonder if GoT Starbucks Cup Blooper Was Bigger, Check Out Funny Memes and Jokes

A new picture from the sets of Mahabharata has leaked and it shows a set direction flaw. A cooler somehow made its way into the shot having the mighty Bhishma Pitamah and surprisingly nobody had noticed it until now when the mythological show is retelecasting amid Lockdown. Check out viral memes and jokes. 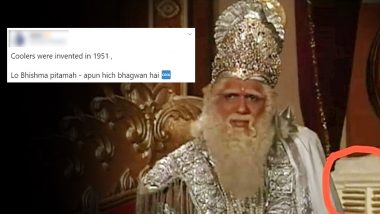 Guys, Bhishma Pitamah was way cooler than you can ever be and the cool here is literal! Long ago, when Bhishma Pitamah was sharing his words of wisdom with King Dhritarashtra, he was actually doing all that while enjoying the fresh air of a cooler! A new picture from the sets of Mahabharata has leaked and it shows a set direction flaw. A cooler somehow made its way into the shot having the mighty Bhishma Pitamah and surprisingly nobody had noticed it until now when the mythological show is retelecasting amid Lockdown, just like Ramanand Sagar's Ramayan. First of all, this totally reminds us of the Game of Thrones set goof-up where in the Game of Thrones 8, episode 4, Daenerys Targaryen got a Starbucks cup in Winterfell. And secondly, cooler in the era of Mahabharata is just the most desi version of the GOT goof-up for sure. Ramayan Funny Memes and Jokes: From Ravana Vadh and Lakshman's Comebacks to Hilarious Posts about Vibhishan and Kumbhkaran, Don't Miss Any Reason To LOL Today!

The picture of Bhishma Pitamah with the cooler is going viral online with netizens making funny memes and jokes! The mythological shows such as Ramayan and Mahabharata are so close to our hearts that it is almost impossible for us to conceive of the fact that the actors are ultimately actors and the whole show is a result of collective efforts from so many artists. Well, now that the picture is out, netizens cannot keep calm and they have flooded Twitter and other social media with funny Mahabharata memes and jokes! Take a look at some of the best ones:

No One Saw This Coming!

As an effort to make the lockdown period less stressful old TV shows and serials are retelecasting on Doordarshan. With Mahabharat and Ramayan episodes on TV, it is like the 90s all over again! From Byomkesh Bakshi to the popular Shah Rukh Khan series Circus to Buniyaad, Mashaal and Girish Karnad classic Malgudi Days, we have it all back. So stay at home laugh on memes and jokes and relive some old memories during this tough time!

(The above story first appeared on LatestLY on Apr 23, 2020 11:45 AM IST. For more news and updates on politics, world, sports, entertainment and lifestyle, log on to our website latestly.com).