Wild photos show the moment a Siberian tiger mauled a snowman to nothing but a pile of powder at the Korkeasaari Zoo. The pictures of the animal had gone viral on social media. 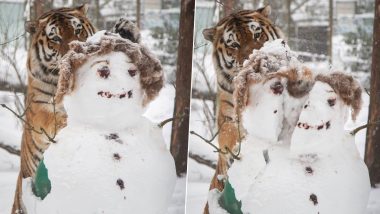 Not only humans have fun with the snow. Animals enjoy too! In 2019, a zoo panda in Moscow was captured attacking a snowman and eating its arms and nose. Something similar but a big cat-tack was spotted in Finland Zoo. Wild photos show the moment a Siberian tiger mauled a snowman to nothing but a pile of powder at the Korkeasaari Zoo. The officials shared the moment on their Facebook page, which show the animal chopping the snowman’s head in half with its grr-eat big paw. It was not cleared if the zoo had stuffed meat or other kinds of reward inside the snowman, but the tiger surely was in relief after it clawed the snow figure.

In the pictures, the animal was seen at first sniffing the snowman, who was wearing a wig. The male tiger pounced on its head and then broke it into halves, before mauling it into a pile of white powder in the snow. “Animal attacks on snowmen have continued in Korkeasaari. For safety reasons, we recommend that snowmen do not hide pieces of meat, blood or animal hair in their pockets,” read the Facebook post. Rare 'Melanistic Black Tiger' Spotted in Odisha; From Rare Golden Tiger to Majestic Snow Leopard, Check Out 5 Wild Cats.

The photos were vastly shared on social media, with animal enthusiasts stunned at the pictures. The zoo reportedly is home to about 150 animal species and almost 1,000 plants. Siberian tiger triplets were born in the zoo in 2016.

(The above story first appeared on LatestLY on Jan 14, 2021 04:58 PM IST. For more news and updates on politics, world, sports, entertainment and lifestyle, log on to our website latestly.com).