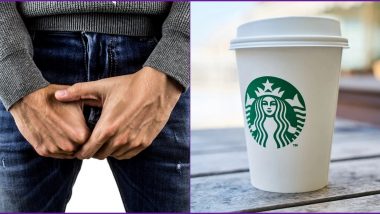 Popular coffeehouse chain Starbucks has found itself in trouble more than once over complains from their customers. But the latest lawsuit may seem bizarre. A man from Roseville, US has filed a complained against the coffee chain after hot tea spilt on his private parts and disfigured it! The incident took place in 2018, when he was in drive-thru of the coffeeshop. But while delivering his order of hot tea, the lid came loose and fell over his hands, stomach, thighs and genitals. The hot drink burns left his genitals disfigured and he is slowly recovering. He faced a lot of discomfort even while getting intimate. He has now suing Starbucks and Pactiv Packaging, which provides the cups and lids. Muslim Woman Complains Starbucks' Target Barista Wrote 'ISIS' on Her Cup Instead of Name in Minnesota, Files Discrimination Charges.

Tommy Piluyev visited the coffee chain drive-thru in Roseville in October 2018. He ordered for two grande-sized Honey Citrus Mint Teas. While taking in the order, the lid lost its cup and dislodged over the window spill, severely burning him. As per his lawsuit, he was unable to open the door and escape because it was a drive-through window but he accelerated and pulled up in an adjacent parking lot. He took off his pants hastily but the damage had been done. Piluyev had to spend almost 11 days in the burn unit to recover from the burns. He sustained, "partial-thickness burns with blistering across the lower left abdomen, thighs, penis, scrotum, peritoneum and buttocks" according to the suit. Starbucks Barista in US Who Refused to Serve Woman for Not Wearing Mask Receives $80,000 Tips Virtually!

The damage to his private part even made it difficult for him to get intimate and sex became painful. He is slowly healing back and learning to walk again but it has been a long process. The suit alleges negligence and product liability by Starbucks. Piluyev's attorney also states that his client would need laser treatment or a plastic surgery to repair the permanent damage of these burns. He wants to prevent such disasters happening to anyone else in the future. Starbucks has claimed they are currently evaluating the claim.

(The above story first appeared on LatestLY on Sep 18, 2020 08:23 PM IST. For more news and updates on politics, world, sports, entertainment and lifestyle, log on to our website latestly.com).