Christmas-Themed Photoshoot of Pet Dogs Goes Viral For Their Distinct Expressions! Netizens Can Relate Their Holiday Spirit To These Cute Pics 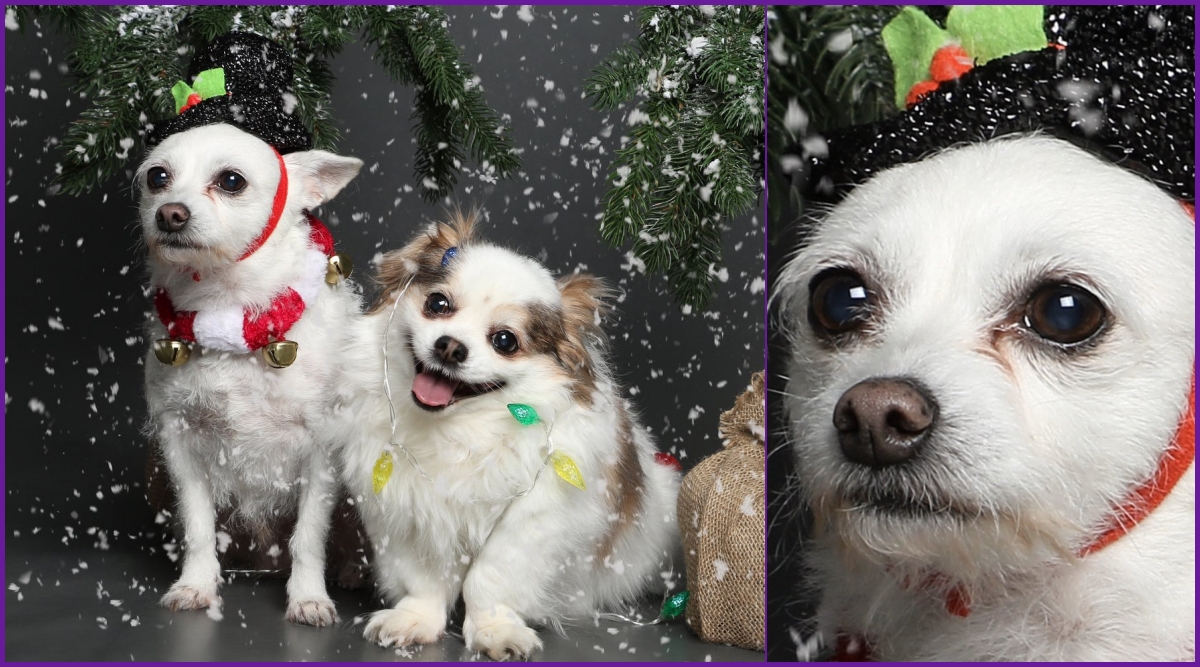 As the holiday season has got everyone all excited, people's pets are becoming a part of it too. So while some people may have started with their Christmas decor, pet owners are sharing pictures of their pooches and kittens all decked up for Christmas. A yearly Christmas-themed photoshoot of two pooches is going viral on the internet. Well, pets and their adorable pictures are always a reason to make many people smile, this particular picture is going viral for the very distinct expressions on the two pet dogs. While one of them looks very enthusiastic about the celebration, the other as the owner mentions looks like going through some sort of existential crisis. The picture has got over 7 lakh likes and over a lakh retweets. It’s Winter! Dog Owners Share Outrightly Adorable Photos and Videos of Their Pets Playing in First Snow of This Season.

Twitter user Laurenn Carterr posted a picture of her two pooches and looks like its a yearly tradition for her and her pets. She shared few pictures in a thread but the one in which the two dogs have distinctly different expressions has caught the internet's fancy. The dogs look cute, no doubt but the caption adds more fun to it. As she wrote in her tweet, "Took my dogs to take their yearly Christmas photos. It’s really hard when you have one super photogenic dog and one dog having an existential crisis." The pictures are now going viral on the internet. Dog With Super Long Nose Becomes Internet Sensation! View Pictures And Videos of Eris, a Borzoi Sighthound Going Viral on Social Media.

Took my dogs to take their yearly christmas photos. It’s really hard when you have one super photogenic dog and one dog having an existential crisis. pic.twitter.com/4gUyIsB5OJ

The dog's serious expression has got everyone relating to it. Some of them are making their own reactions to its face. Check some of the funny reactions.

When You Say You're Fine

They ask you how you are & you say that you're fine. & you're not really fine but you just can't get into it bc they would never understand... pic.twitter.com/EzINYSR4SB

Outside Vs Inside Spirits

How I look on the outside VS. How I feel on the inside. pic.twitter.com/K5uBzuliZ5

I’m with the existential crisis dog.

Someone Made Him a Wallpaper Too!

I mean absolutely no one:

Clearly a lot of people could relate to it. Meanwhile, Laurenn also shared some nice pictures of her two pooches to show that they aren't really in the dampest of spirits.

Sometimes she’s rubs off on him. pic.twitter.com/hVOKPvnzbw

Well, aren't they cute?  Some others took this as a chance to post pictures of their pooches and kittens dressed up for Christmas. Well, the Christmas mood is really up among the pets. But we just cannot forget the existential crisis face.