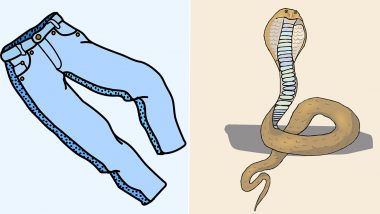 The sight of a snake can freak people out even from a distance, so imagine the plight of a man who had the reptile slither up his pants! The unfortunate incident took place in Uttar Pradesh's Mirzapur among a group of workers who were working on some electricity fixing work. The group of workers had had their dinner and resting in the nearby Anganwadi centre for the night. A cobra snake entered the pants of one of the workers in the middle of the night. The worker thankfully realised and managed to stand up at the spot. But he had to hold on to a pole and stand for about 7 hours until the snake rescue officials came in. A video of the snake rescue has been shared online. Live Snake in Pants! Man Caught Smuggling 16-inch Boa at Berlin Airport.

The incident took place in the Jamalpur village of Mirzapur when a group of workers were working on installing electricity pole and wires. As per reports, a total of 8 workers were working together and stayed at the centre around. After having dinner when all of them were hoping for sound sleep, a worker named Lavkesh Kumar, 28 was not so fortunate as a snake entered his pants. He told others who helped him to stand up in a safe manner. But he had to spend almost 7 hours standing as it was in the middle of the night. Thankfully, the snake did not bite Lavkesh all this while. Snakes Come Out in The Rains: Here's What You Should Do If You Spot Serpents in Your Area This Monsoon.

The snake rescue officials and police were called in for help who carefully tore his pants to take out the reptile. Kumar was really fortunate that the snake did not bite him all this while. The officials had arrived with medical help and an ambulance in case the snake did bite him during the rescue operation. But both the snake and man were safe.

(The above story first appeared on LatestLY on Jul 30, 2020 11:22 AM IST. For more news and updates on politics, world, sports, entertainment and lifestyle, log on to our website latestly.com).