A video of the dog being treated well by the security guard in Philippines mall and kindly being escorted out was shared on Facebook and it had grabbed eyeballs. The pooch is now a part of the mall's security team. Let us look at similar incidents when dogs secured 'jobs' with their presence. 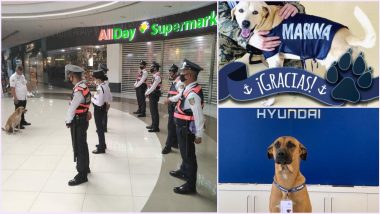 In the current scenario, when some people may be finding it really hard to find a good job, the 'good bois' are getting hired instead. We are talking about some dogs who have made their presence felt so well that they became a part of the team. In a recent example, we have a stray dog from Philippines who went viral when he was found lazing in a mall. A video of the dog being treated well by the security guard and kindly being escorted out was shared on Facebook and it had grabbed eyeballs. Like every dog video, this 'good boi' also received its share of love online. And the same love has now been reciprocated with a hiring of the stray into the security team. The pooch is now a part of the mall's security team. Let us look at similar incidents when dogs secured 'jobs' with their presence. Stray Cat Elwood Gets Hired as Security Guard in Australia's Epworth Hospital After Roaming Outside For a Year (See Pics).

Last week, a Facebook user uploaded a video of a stray dog entering Vista Mall in Philippines. The video clip showed how the security person treated the dog like it was their pet and escorted him out, holding its paws. The video went crazy viral on social media and melted hearts on social media. Now comes an update, that the team has decided to make him part of the mall security! Picture of the same stray now in company of the mall's security has been shared online. Missing Dog Walks Into Police Station to Report Himself and Then Returns Home, 'Good Boy' Impresses Netizens.

Here's a Pic of The Dog With The Mall's Security Team:

Cute, isn't it? But he's not the first one to secure such employment. In the initial months of the pandemic we saw pet dogs taking up the role of essential workers as they helped in food delivery.

Just about a week ago, another rescued dog from Mexican floods joined the Mexico Navy. A video of a pooch being rescued from the flooded water in Southeast Mexico went viral online. After people hailed the video for a great display of humanity, the Navy went ahead to adopt him as a part of their team.

Here's a Pic of Dog Being Adopted Into The Navy:

In Brazil, a street dog who regularly paid visit to a Hyundai showroom became part of their team! The dog used to come here often and became friendly with the employees here. And soon, he had his own ID card issued as a member of the Hyundai family.

On an unrelated note but another cute pawfessional comes from Ohio State University' Medical Center. They have hired a doggo whose only job is to come and greet his co-workers. He may not be a stray or a rescued dog, but an important addition to the team. Well, dogs can make great company and they would also be relieving some work stress with just their presence.

(The above story first appeared on LatestLY on Nov 27, 2020 09:59 AM IST. For more news and updates on politics, world, sports, entertainment and lifestyle, log on to our website latestly.com).