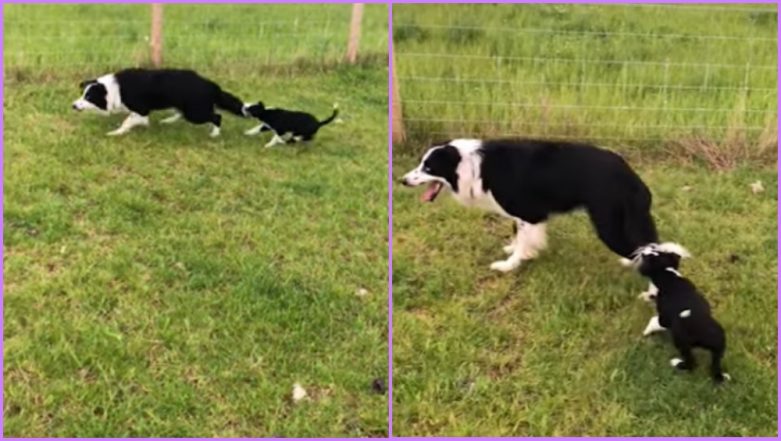 It is a known fact that puppies are amazingly loyal to all of whom they love. They hate it, if your attention is divided. When you bend down to pet another dog, our pup may shove his way in front of us, knocking our hand away from his canine companion. But they look adorable! In a recent account, another such behaviour has been captured but this time, it is for its companion. A playful puppy became jealous of an older sheepdog, who was just trying to do his job. The viral footage captured the little one, holding the tail of its elder buddy, tightly in her tiny jaws. If you love puppies, you cannot miss this video. Kakapo Threatened by Fungal Infection! Know Interesting Facts About World’s Fattest Parrots.

The puppy is reportedly, nine-month-old Flo who is holding the tail of Sam. In the viral video, she is seen hilariously pulling him back from the flock of sheep, as he tries to approach them in Inverurie, Scotland. Although Sam, is captured attempting to spring towards the sheep, but it is not easy to get away from the pup’s tiny grip. Family of Swan Makes UK Train to Run at Snail's Speed.

Watch Video of the Jealous Puppy

The adorable moment was taken by owner Rory Gregor, who recorded the film in the Scottish field. As the video captured millions of views, Gregor was interviewed with media outlets, such as Daily Mail, in which he was quoted saying, “Sam and I were trying to gather the sheep for vaccination. Sam was trying to concentrate on his job, but Flo was too eager to play and wouldn't leave him alone. It was hilarious to see.” Sam, who is not related to the pup, finally manages to free himself, which leaves, tiny Flo rolling on her back.