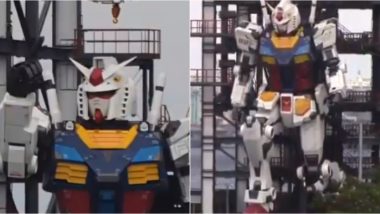 The life-sized replica of the RX-78 model made at Gundam Factory in Yokohama, just south of Tokyo in Japan can move now! Standing at 60-feet-tall and 25 tons, the robot can kneel, move its fingers, and point to the sky. It is first of its kind created by man to have so many movements. Gundam is a popular fictional robot that has been appearing in TV series and movies since 1979. The life-size model was to make it realistic, and one of a kind engineering feat. Video of the robot moving which has gone viral shows the giant machine taking a kneel and bowing its head, standing up, lifting its arm and showing a finger. Reportedly, it can also open its eyes and even turn its head. Beer Cart, Robotic Barman Serves Contact-Free Beers in Spain Amid Coronavirus Pandemic.

The Gundam Factory was to open its amusement park in October, but was delayed indefinitely due to the COVID-19 pandemic. Currently, the model is being held at the Port of Yokohama where it will be for a year.  The video shows workers touching up the robot on a crane as the giant Gundam moves its legs and rotates its torso. The video looks both mesmerising and scary at the same thing. It looks like a giant that has the superpower to invade the city, just like all the science fiction shows. Vyommitra is India's First Humanoid to Go in Space on Gaganyaan, Here Are Other Robots That Have Been Created For Space Missions.

Life-sized Gundam in Yokohama is now in testing mode.pic.twitter.com/51HVoraPb7

RX-78 is sure to remind you of Transformers and many other robot movies and animations that you have watched. Gundam is famous not just in Japan but also in the United States and other places too. Once the work of the robot has been completed, it will be able to move with 24 degrees of freedom, with which it can walk. The whole machine will weigh 25 tons and that's a little lightweight, as machines these big are pretty heavy to handle. You can watch YouTube videos from Gundam Factory Yokohama about their engineering and design work to understand the making of the robot better. Assam: Manholes in Guwahati to Be Cleaned by Robots Named 'Bandicoot'

Event That Was Organised for Public Revealing of Robot Last Year:

The robot was to reveal to the public during Yokohama Gadget Festival a talk called 'Technology-Settings and Reality Necessary for Animation Expression in Mobile Suit Gundan'. The festival garners companies, startups, educational institutions, civic groups, and individuals under 'Let's liven up Yokohama with innovation!' The talk session will also cover scenes from the video of "Mobile Suit Gundam" and compare its approach from the real world of technology alongside animation creators.

(The above story first appeared on LatestLY on Sep 22, 2020 12:53 PM IST. For more news and updates on politics, world, sports, entertainment and lifestyle, log on to our website latestly.com).