How Is Getting 'Ratioed' on Twitter Different From the Lesson 'Ratio' We Learnt in Primary Mathematics? From 'Basic' to 'Thirsty', 12 Redefined Social Media Words That You MUST Keep Up With

A noun, Ratio is now being used as a verb to be ratioed on Twitter and it doesn't mean what you think it does (Did you hear that Algebra? At least Ratio is of some use). The term Ratio from our Maths homework has changed and here's what it means 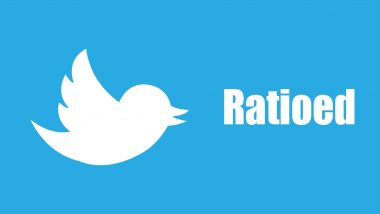 You would think that words from our school Mathematics syllabus would leave our paths now that we're all adults living our lives paycheck to paycheck? Moreover, Maths? The ONE subject that social media blames for being useless in our daily lives. Hello? Well, one of the terms from the basic book of Maths -RATIO- has shown relevance in the social media world with a completely revolutionised meaning. A noun, Ratio is now being used as a verb to be ratioed on Twitter and it doesn't mean what you think it does (Did you hear that Algebra? At least Ratio is of some use) The term Ratio from our Maths homework has changed and here's what it means: ‘Explain in Football Terms’, ‘Explain in Fortnite Terms’ Trend on Twitter Amid Ukraine-Russia War Crisis and We Have No Comments!

While that must've taken you down the memory lane, here's the Urban Dictionary meaning of being 'ratioed' means:

According to UD, being ratioed is when "a reply to a tweet gets more likes than the tweet it was replying to usually indicating the unpopularity or stupidity of the original tweet." Yes, it means that your tweet has gotten engagement but via critisism.

@Dictionarycom does know the meaning of ratio though 😉...

On the social media platform Twitter, a ratio, or getting ratioed, is when replies to a tweet vastly outnumber likes or retweets. This means people are objecting to the tweet and considering its content bad.

Do you see how the definition of this new word ratioed itself has so many terms that didn't exist or wouldn't have made any sense to you while you were solving Ratio exercises in school? Well, it doesn't stop with ratioed. It the past decade, we have seen so many revolutionised meanings of common words that would make you sound like crazy if it weren't for social media. Check out the list we've made for you to keep up if you live under a rock or TBH living a more peaceful live than us. Uh, TBH... BTW means To Be Honest in social media lingo. Oh, and BTW stands for By The Way... Wait we could keep doing this the whole day, so without further ado, check out twelve of the fanciest words from social media:

'Bomboclaat', 'Photobomb', 'Can't Even', 'Noob', ' LMAO', etc. are some other words that have taken over our daily conversation via social media. So, unless you're using Internet Explorer, better catch up!

(The above story first appeared on LatestLY on Mar 01, 2022 10:25 AM IST. For more news and updates on politics, world, sports, entertainment and lifestyle, log on to our website latestly.com).