Ivanka Trump Tries To Strike a Conversation With Christine Lagarde, Theresa May, Justin Trudeau And Emmanuel Macron; Their Reactions Say It All - Watch Video

In a video, Ivanka Trump is seen trying to get involved in a talk with Theresa May, Justin Trudeau, Emmanuel Macron, and Christine Lagarde. However, the dignitaries were apparently not amused by her involvement. 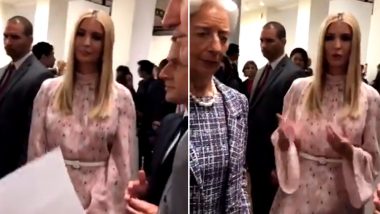 Osaka, June 30: Ivanka Trump, US President Donald Trump's daughter and senior White House adviser, was trolled on social media after a video of her trying to get involved in a discussion among world leaders went viral. Twitter users were quick to point out Managing Director of the International Monetary Fund (IMF) Christine Lagarde's reaction to Ivanka Trump's attempt to get involved in the discussion and trolled Donald Trump's daughter.

In a video shared by the French Presidential Palace, Ivanka Trump is seen trying to get involved in a talk with Theresa May, Justin Trudeau, Emmanuel Macron, and Christine Lagarde. However, the dignitaries were apparently not amused by her involvement. The viral video shows Lagarde rolling her eyes while Ivanka tries to get a word in. Lagarde's reaction was an apparent rebuke of Ivanka's involvement in the discussion. Twitterati couldn't get over the expression Lagarde had on her face when Ivanka speaks. Ivanka Trump Reads Out Details About Donald Trump's Meeting With Narendra Modi And Shinzo Abe, Twitterati Question Her Role at G20 Summit.

Many also questioned her presence at a place where heads of different countries are meeting. Alexandria Ocasio-Cortez, the youngest woman to serve in the US Congress, also took a dig at Ivanka saying "being someone's daughter isn't a career qualification".

Viral video of Ivanka Trump trying to get involved in a discussion of world leaders and reactions of netizens:

Ivanka Trump appears to be trying to get involved in a talk among Macron, May, Trudeau and Lagarde (IMF head).

The video is released by French Presidential palace. pic.twitter.com/TJ0LULCzyQ

The expression on Lagarde’s face... https://t.co/6EmjwBlQue

Damn, that reaction from Christine Lagarde is withering. https://t.co/wYDTC6YQkn

Lagarde's expression says it all. "Why are you here and why are you talking"

She has no place there! This is so ridiculous. Nothing qualifies her to stand amongst world leaders and way in on any subject.

It may be shocking to some, but being someone’s daughter actually isn’t a career qualification.

It hurts our diplomatic standing when the President phones it in & the world moves on.

The US needs our President working the G20. Bringing a qualified diplomat couldn’t hurt either. https://t.co/KCZMXJ8FD9

Ivanka is among the US delegation accompanying Donald Trump to Osaka in Japan for the G20 Summit. Yesterday, she was trolled reading out what was discussed at Donald Trump's meeting with Indian Prime Minister Narendra Modi and Japanese Prime Minister Shinzo Abe.

(The above story first appeared on LatestLY on Jun 30, 2019 04:23 PM IST. For more news and updates on politics, world, sports, entertainment and lifestyle, log on to our website latestly.com).