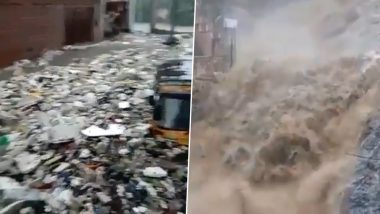 Parts of Rajasthan have been lashed by severe rains and the capital city Jaipur is ravaged since yesterday. With continuous heavy rains, the low-lying areas have been flooded and the situation is horrifying. Netizens have shared visuals from the city and one particular video is going viral and needs everyone's attention right now. The flooded rainwater is carrying garbage waste, some debris and plastic waste. It shows how much of a waste we have given to nature and it throwing it all back at us! There are few other videos too which show how horrifying the situation is in the Pink City. AAP Replies To Binod After Latter Shares Jaipur Video of Half-Submerged Bus Claiming it of Delhi's DTC Bus.

As per reports, the heavy rains are a result of a cyclonic circulation over east Rajasthan. The weather department forecasted moderate to intense thunderstorm for several districts. Officials said that Jaipur received 132 mm of rainfall on August 14, from morning to evening. Parts of the city have thus seen heavy waterlogging and the situation is horrifying. Netizens have shared pictures and videos from different parts of the city. The video of waste carried in the rainwater has caught the attention of India's young climate activist Licypriya Kangujam. She rightly captioned it, "Conditions of Jaipur Rain. What we have given to nature, nature is giving us back!" Heavy Rains in Parts of Rajasthan, More Forecast.

#HappeningNow Conditions of Jaipur Rain. What we have given to nature, nature is giving us back!pic.twitter.com/WL0siN9IxZ

My thoughts and prayers with the people in Jaipur! So much damage ! This is a tough time! 🙏🙏 pic.twitter.com/jPj0WBxiGi

At District Collectorate in Jaipur,132 MM Rain till 11:30 AM

The videos paint a really terrifying situation from the state. Government offices and hospitals were also flooded with these waters. The low-lying areas have been severely affected. The strong water currents even resulted in part of a mountain being washed away. Three people have been reported dead due to washing away in the strong currents. Civil defence and Army has been alerted over the situation.

(The above story first appeared on LatestLY on Aug 15, 2020 01:01 PM IST. For more news and updates on politics, world, sports, entertainment and lifestyle, log on to our website latestly.com).