James Charles Received the 'Dirtiest' Pick up Line of All Time on Tinder Asking Him to Get a Sample of His 'New Primer'! Fans Are in SHOCK 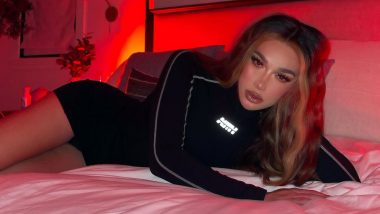 James Charles revealed a weird message that he received on Tinder and the internet is collectively having an SMH moment. The beauty guru took to Twitter to reveal an extremely unexpected message that he received on Tinder and it is something that looks like such a waste of opportunity. A big part of the filterless James Charles' life is social media. He has never shied away from sharing glimpses (even the most embarrassing ones) of his life on Twitter or Instagram BUT this one is just unbelievable. This person took to Tinder to say this: "James, I have an absolutely dashing line of products for you to try. You just have to get a sample of my new primer (my c*m)."

Exactly?! How to waste an opportunity like that? For those who don't know, primer is a cream that is applied before makeup to get your skin ready for the foundation, concealer and so on.  However, James Charles shared the screenshot online with a caption: "haven’t heard this pickup line before"

James Charles Received the 'Dirtiest' Pick up Line of All Time on Tinder:

In 2019, James had shared some insights into his dating life on dating apps and they were shocking too but in a different manner.

5. I’ve went on many awesome dates with either gay, bisexual or closeted men over the last 6 months. I have gone on 0 dates with “straight men” - LITERALLY EVER.

6. I deleted dating apps from my phone last week because although I’ve CONSENTUALLY met some great people from them,

Well, fans are not happy. Moreover, recently, James Charles & Charli D'Amelio have found themselves in hot water after sharing their thoughts on Brandin Bernard case. James Charles later took to Twitter to defend himself and Charli D'Amelio saying that "You can't win."  James Charles Faces Flak Online for 'Insulting' Classical Indian Music! 'You Are Not Lata Mangeshkar or Shreya Ghoshal' Say Furious Netizens.

James Charles also faced flak online a couple of months ago for partying amid the pandemic.  Being called "bad influence" after pics and videos of YouTubers and TikTok starts partying recklessly went viral.  Who's who from of YouTube, Instagram, and TikTok stars were partying without masks at the Hype House while the number of coronavirus cases was still high in Los Angeles. From Tana Mojeou to James Charles, everyone was called out on social media after some of them actually shared snippets on their social media.

(The above story first appeared on LatestLY on Dec 13, 2020 09:12 AM IST. For more news and updates on politics, world, sports, entertainment and lifestyle, log on to our website latestly.com).