A video from the same event has been shared online and it is going viral for Manoj Tiwari's goof up by mixing Hindi and English while talking to the actor playing Ravan. Tiwari, who is enacting the role of Angad, a Vanara prince blurted out, "Ek second, Ek second" and "Hamare team ka chota sa bandar hai," refering to Hanuman during the act. 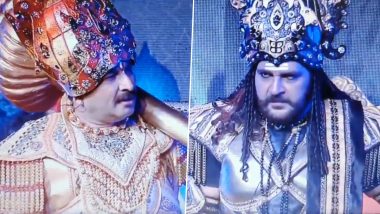 The festival of Dussehra 2020 is being celebrated today. It is one of the most significant festive occasions as it symbolises the victory of good over evil after Lord Rama defeated Ravana, the King of Lanka. Every year in the days preceding to this festive day, Ram Lila which is a dramatic reenactment of the epic of Ramayana is held in Ayodhya, Lord Rama's birthplace. Actors play a part in this Ram Leela, enacting different roles. A video from the same star-studded event has been shared online and it is going viral for Manoj Tiwari's goof up of using English words while talking to Ravana's character. Tiwari, who is enacting the role of Angad, a Vanara prince blurted out, "Ek second, Ek second" and "Hamare team ka chota sa bandar hai," refering to Hanuman during the act. A video of the exact moment using "second" and "team" words has been shared online and is going viral. Funny Videos of Ravan Dancing at Ramlila in Punjab and Ravana Effigy Travelling on an Ambulance Go Viral.

The star-studded Ram Lila or Ram Leela is being held at the Laxman Qila in Uttar Pradesh from the first day of Sharad Navratri from October 17. This programme is live streamed every evening on DD National. Ravi Kishen, Shahbaz Khan, Vindu Dara Singh are some of the actors in the large crew of this reenactment of epic story of battle between Lord Rama and Ravana. Now during one of the days, Manoj Tiwari who plays Angad is seen talking to Ravana and he seems to have forgotten the character's dialogues. While talking about Hanuman setting Lanka on fire he says, "Ek second ek second. Woh jo bandar aaya tha, Lanka jala ke chala gaya. Mujhe ghor ashcharya ho raha hai. Woh toh hamare team ka chota sa bandar hai. Bas poonch nachaya karta hai." A video clip of this scene is going viral on social media with some funny reactions.

The video has been viewed close to 20,000 times and has over 321 retweets with funny responses. Check some of the reactions below:

Was he trying to be funny?

He definitely is not! https://t.co/dVJAUs5zak

While some had a good laugh, others were not impressed with such a goof-up and felt that the actors should take their roles seriously. Some have even trolled the the Rajya Sabha MP refering that he should stick to Rinkiya Ke Papa. What do you think about this goof-up? Are we in Ghor Kalyug? We will give you Ek second to think about it.

(The above story first appeared on LatestLY on Oct 25, 2020 03:54 PM IST. For more news and updates on politics, world, sports, entertainment and lifestyle, log on to our website latestly.com).